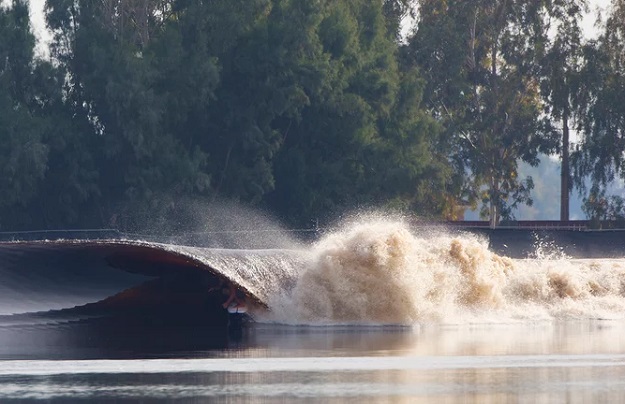 If you’ve ever tried to surf, you know full well how exhilarating and challenging of an endeavor it can be. It may look easy enough on YouTube, but when you’re out there on the water, learning how to catch and ride even a small wave takes a whole lot of practice.

Unfortunately, practice doesn’t come easy if you’re not situated near an ocean. But a new and revolutionary invention from Kelly Slater, an 11-time world surfing champion, may soon change that. Recently, Slater, who is otherwise heralded as the Michael Jordan of surfing, unveiled a huge breakthrough in wave technology that was, quite literally, 10 years in the making.

Now what in the world is wave technology, you might naturally be wondering. Well, Slater and his partners at Kelly Slater Wave Co have been working with a team of engineers to develop a man-made wave that would allow surfers to perfect their craft outside of an ocean environment..

Over the weekend, Slater released video footage of his company’s new wave technology in action, prompting a number of surfing publications to immediately pick up their jaws off the floor and deem the technology an instant game changer. Within an hour of its posting on Facebook, the video had already amassed more than 250,000 views.

The video is truly astounding and can be seen via the Vimeo embed below.

Again, the response to what is being dubbed “Kelly’s Wave” has been nothing short of incredible.

Surfline notes, “Kelly Slater calls it “a freak of technology.” We call it “the future.” You call it “all I want for Christmas for the rest of my life.” There has never been another artificial wave like this in the history of our sport. Never ever. Just make sure you’re not chewing or drinking anything while watching this, okay? You’ll choke. “

SurferMag writes, “It’s been called the holy grail or the mythical unicorn of sport, but creating a perfect manmade wave has been just out of our collective grasp for some time. On Friday mornin, the Kelly Slater Wave Company dropped this clip of him surfing a misty artificial wave and, mark my words, the surf world changed forever. If this wave can be replicated, this opens the world up—for better or worse—to the sport. The next few weeks/years are going to be very interesting. Also, how in the hell did he keep this under wraps for so long?”

“Now that the world title has been decided and events for the year have finished, I’m excited to show you what I’ve been sitting on for the past couple of weeks. For nearly ten years, my team and I have been working on creating the first truly world-class, high-performance, human-made waves. This is something I dreamt about as a kid. Through rigorous science and technology, we’ve been able to design and build what some said was impossible, and many very understandably never thought would actually happen. I’m proud to say we took our time to get it right, and the first fully working prototype of the wave now exists (a huge personal thank you to everyone in our lab and on our team for seeing this through!). I’ll be sharing more details in the coming weeks and months but I can’t wait any longer to share a film of my experience surfing the wave for the first time, almost two weeks ago. It was an insane day. I’m still a little in disbelief, and trying to process how much fun this wave is, but it certainly feels like this is going to change a lot of perceptions about human-made waves. There’s a direct link in my bio to kswaveco.com to view the short film. Can’t wait to see other people surf it soon and show what is possible on this thing”