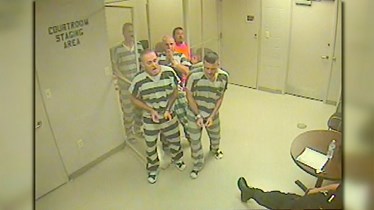 Officers were probably preparing for the worst when hearing an increasing amount of noise coming from one of the floors of the Parker County jail on June 23rd. And at first it appeared as though their worst nightmares were coming true — camera footage showed inmates breaking out of a cell, with a security guard lying unconscious on the floor. Of course, things aren’t always as they appear.

The prison guard in the frame had suffered a heart attack, and at least eight prisoners broke out from a locked room to help him out, WFAA reports.

“He just fell over,” inmate Nick Kelton said about the guard, who minutes before was joking with them. “Looked like an act. Could have died right there.”

The inmates managed to get out of the locked room and started to make noise so that someone would notice and come help the guard.

“We were worried they’re going to come with guns drawn on us,” Kelton added. Floyd Smith, another inmate, added, “They thought it was a fight. They thought we were taking over.”

Sgt. Ryan Speegle said he didn’t know what to expect when he got downstairs, alarmed by the unexpected commotion. The fallen guard had keys and a gun. “It could have been an extremely bad situation,” Speegle told WFAA.

Speegle then directed the inmates back to the cell, before beginning to perform CPR on the unresponsive guard together with a colleague. Paramedics were able to resuscitate the guard who survived the entire incident, and will return to work soon.

Ironically but not surprisingly, the room the inmates escaped from in order to help the dying man has since had its security reinforced.