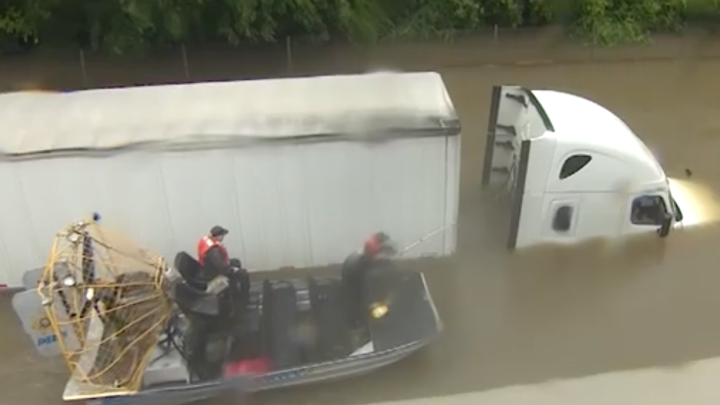 News crews covering natural disasters like Hurricane Harvey have the tricky task of reporting on the event as it unfolds while also doing their best to remain safe themselves. Brandi Smith of KHOU, a Houston CBS affiliate, found herself doing both of those things and more when her crew spotted a stranded truck driver trapped inside of his vehicle’s cabin with water rapidly rising all around him.

As luck would have it, Smith and her cameraman were in the perfect place and time to help save the driver’s life. A sheriff’s truck towing a rescue boat happened to be driving along the deserted overpass where the reporter had spotted the stranded trucker. She quickly flagged the officers down and a short while later the trapped motorist was freed from his waterlogged truck.

Smith relayed information to the driver, yelling from the overpass to the truck’s open window while the rescue crew deployed and made their way to the man, continuing her live report the entire time.

“The #KHOU11 signal cut out just as Harris County Sheriff’s Office crews got their rescue boat in the water to pull a semi driver out of his flooded cab,” Smith wrote in a Facebook post. “I’ve had SO many people asking if he made it out OK and I wanted to share the video. (We kept going and rolling until the camera’s battery died, not knowing we’d been knocked off the air.) They pull him out around the 4:40 mark. THANK GOD for that crew.”