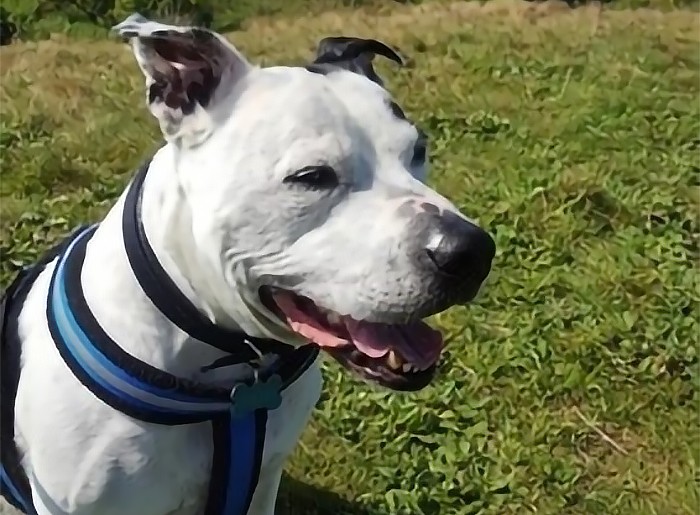 Dogs tend to be extremely upbeat creatures — that is, unless you raise them to be hostile, in which the dog is just a reflection on how bad of a human being you are — but one particular pooch in Scotland might be the happiest of them all. Buster is a Staffordshire bull terrier (commonly called “staffies”) who had such an unbreakable tail-wagging habit that he actually broke his tail.

Now the pupper, who was in the care of the Scottish SPCA for two years, has found a home where he can live out the rest of his years with humans who are more than happy to accept his affections.

Buster, who has been called the “happiest dog in the world,” absolutely loves life. He loves it so much that his tail-wagging resulted in repeated injuries when he’d get excited. Eventually, the tail had to be amputated to prevent future distress, but that never dampened Buster’s spirits.

“After two years with us here at the centre, it’s great that he has finally found his forever home where he has unlimited bum scratching and a big sofa to snuggle up on,” his new humans told the Scottish SPCA. Buster is also reportedly a big fan of cuddles and the local mail carrier has become his best friend.

After being adopted by a family earlier this year, Buster has become a bit of a poster boy for the Scottish SPCA’s rehoming program. Staffies and various staffie cross-breeds are the most common type of dogs needing new homes in Scotland, and the organization is running a “Staffie awareness week” to let everyone know that there are lots of good boys like Buster that just want someone to share their love with.