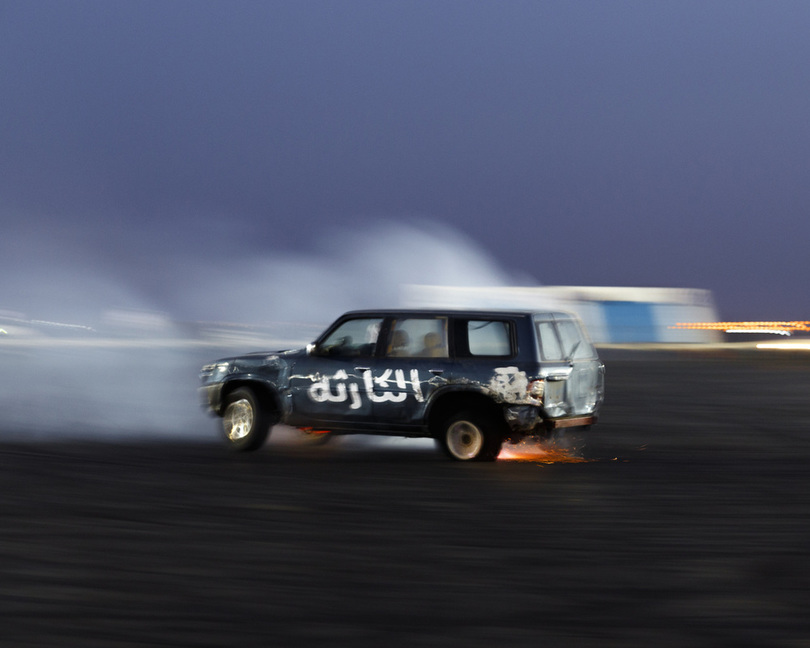 If you thought that doing donuts in a parking lot as a kid was cool, then you have no idea what cool is. I don’t either, probably because I’m not a rich kid with the resources and willingness to do crazy stunts in a “sport” called hajwalah that can get yourself and others killed.

Hajwalah has simple rules. You need to cause as much mayhem as possible during the time you’re given to drive an SUV. Well, you’re not exactly driving it in a proper manner of the word.

“First, get your SUV up to 100 mph or so,” Wired says in its brief explanations of the rules. “Then jerk the steering wheel back and forth to get your ride rocking. Do it right, and you’ll end up on two wheels, and if you’re really good, you’ll see smoke pouring from the tires. Be sure to hold your hand out of the window, using your fingers to indicate which gear you’re in. Hit fifth, and you just might win.”

“The more reckless you are, the better—as long as you don’t crash,” says Peter Garritano told Wired. He spent a week in UAE last year photographing and documenting the sport – check out his photos.

This is hajwalah, a phenomenon that gained popularity in countries like Saudi Arabia, UAE, Qatar, and Oman. It all started in the 1970s, and while it might sound fun for some, it got people killed. Three years ago, a hajwalah driver was sentenced to death for killing two people.

Now, fans of the sport want to “play” it on regular tracks. “It used to be going out with your friends on the streets and causing mayhem. Now, it’s causing orchestrated mayhem,” Garritano said. Exhibit A:

Events are held in Dubai every other Friday. Each player gets three minutes to do the craziest possible stunts in an SUV. The preferred weapons of choice are Nissan Patrols and Toyota Landcruisers, but they’re rocking Ferrari engines inside.

How do you win the trophy? “The more out of control you are, the more valuable that is to your score,” Garritano explained. “Guys would burn down their tires and get onto the metal rims—tipping your car over is really good, too.”

There’s no money in this, and probably the rich kids don’t need prizes. But if there’s one thing they crave is bodily marks to prove they play the sport. “Everyone I spoke to had a picture of themselves on Instagram in a hospital bed recovering,” the man said. “It’s the same sentiment behind teenagers doing donuts in any part of the world.”