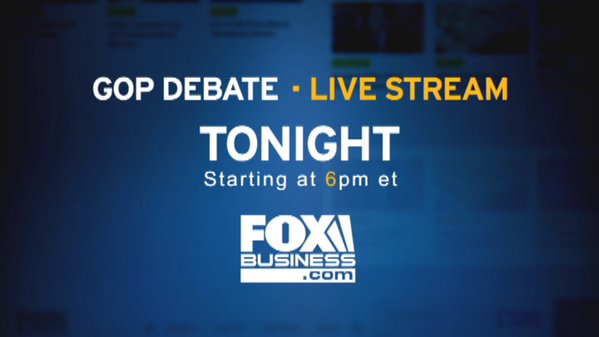 Believe it or not, for the very first time during this exhausting election cycle, we’re finally going to see a primary debate in the same year that a candidate will actually be elected president. Tonight at 9 p.m. ET, Fox Business Network will broadcast the first Republican debate of 2016.

SEE ALSO: New video shows ‘The Force Awakens’ before and after special effects are added

Despite the fact that the field has shrunk significantly over the past several months, there are still too many Republican candidates to fit on a single stage. Therefore, Fox Business will once again host a first debate at 6 p.m. ET featuring Carly Fiorina, Mike Huckabee and Rick Santorum.

Rand Paul was originally scheduled to appear in the undercard round as well, but once he found out he hadn’t made the main stage, he decided to skip the debate altogether.

Fox Business says that the debate will focus on economic, domestic and international policy issues, as its inaugural debate did in November.

If you don’t have a cable subscription, you can live stream the debate on FOXBusiness.com on a desktop or mobile device. The Fox News App for iOS and Android will also feature the stream of the debate.