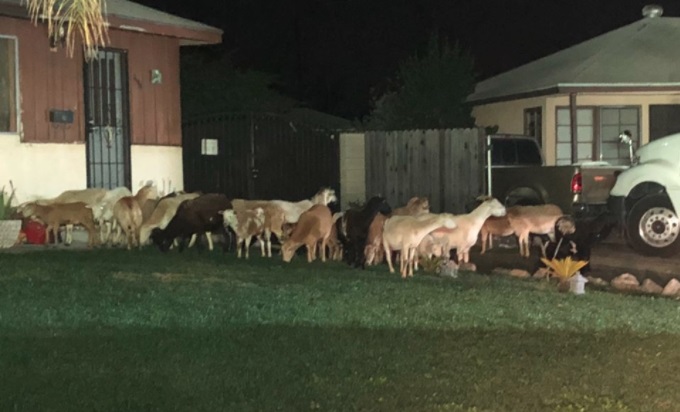 In a story that proves the old adage that truth is stranger than fiction, police in California last Thursday found themselves in hot pursuit of a herd of goats and sheep that were making their way through the West Covina neighborhood. And if that wasn’t crazy enough, the herd was reportedly being led by a donkey.

In a Facebook post detailing the bizarre turn of events, the West Covina Police Department said that it received a call about the herd running amok at about 12:30 in the morning. As it turns out, the animals had escaped “from a residence” in Valinda, a neighboring city about 2 miles away.

Not to fear, the animals were eventually corralled and safely returned to their rightful owner.

As far as news clips are concerned, you’ll be hard pressed to find one more humorous than the one below.

The West Covina Police Department’s full post on the matter reads as follows:

When a police officer reaches the end of his/her career, most of them will say “I’ve seen it all”. Well, let’s add one more rare call for service to that list.

At 12:30 AM, West Covina Police received a call of a herd of animals wandering the area of Francisquito and Valinda. Officers found several sheep and goats being led by a donkey walking along the residential streets. The group of animals at first failed to comply with officers as they evaded capture. With the assistance of the Los Angeles Sheriff’s Department, the animals were safely corralled. It was discovered that the animals had found freedom through an unsecured gate from a residence located in the City of Valinda. The owner was contacted and he responded to assist in herding the animals back to his residence. None of the animals were injured.

This incident is one for the books.