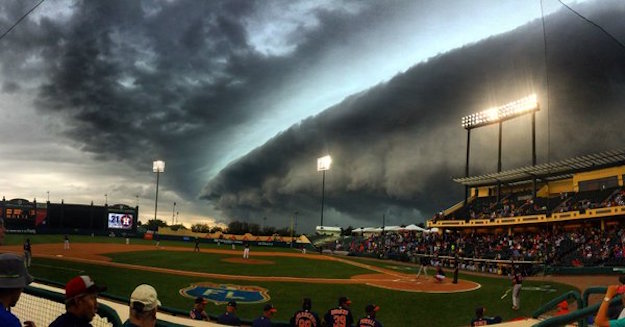 The cancellation of a live sports event on account of a storm is a great way to ruin everyone’s day. On the other hand, if the storm looks like something out of a sci-fi thriller, at least everyone has some great photos to take home.

Last Friday, the Braves and the Astros took the field for a spring training game in Florida. After a slow start, the Braves managed to tack on a run in the sixth inning. The Astros were quick to respond, adding a run of their own at the top of the seventh. Unfortunately for fans in attendance, that would be the last run they’d see.

Oh, and in case you were wondering, here’s why:

One astute Bleacher Report writer was quick to point out that the storm looked like something out of Independence Day, which makes me wonder whether or not this was all some sort of guerrilla marketing for the sequel:

The aliens from Independence Day are landing at the @Braves spring training facility. pic.twitter.com/ORlLneeQlt

If you’re a baseball fan, waiting for opening day can be an excruciating experience. As important as spring training is for players to prepare for a full season of 162 games, it’s not an especially exciting time for fans who want to see their teams make a run in the playoffs. But at least crazy storms can keep us entertained in the meantime.