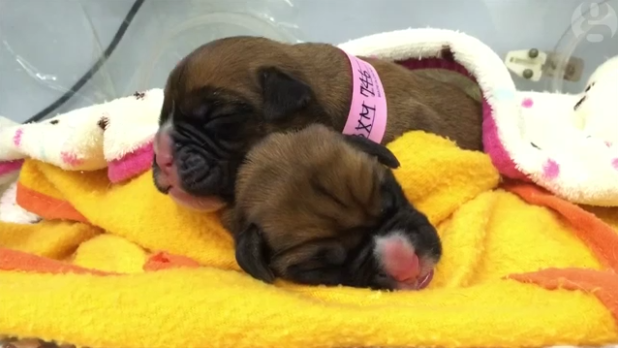 We all love our pets but how many of us love them enough to pay $100,000 to get cloned versions of them after they pass away? One couple in the United Kingdom recently did exactly that, as The Guardian informs us. Britons Richard Remde and Laura Jacques were heartbroken earlier this year when their Boxer Dylan passed away from a brain tumor. They then decided to pay a South Korean firm called the Sooam Biotech Research Foundation £67,000 (~USD$100,000) to use Dylan’s DNA as the basis for a new puppy who would serve as both a replacement and a tribute to their beloved deceased pooch.

MUST SEE: This homemade lightsaber is dangerously crazy, and you have to check it out

As a result, the couple this weekend got two new puppies named Chance and Shadow that bear a striking resemblance to the dog they lost earlier this year.

“After they got him out I still couldn’t quite believe it had happened,” Laura Jacques tells The Guardian. “But once he started making noises I knew it was real. Even as a puppy of just a few minutes old I can’t believe how much he looks like Dylan. All the colorings and patterns on his body are in exactly the same places as Dylan had them.”

Whether you find this heartwarming or slightly disturbing is entirely subjective, of course, though I can’t imagine most people have $100,000 of spare cash laying around to clone their dead animals. Even so, I’m happy that this couple is happy and I hope their young pups grow to be healthy canines.