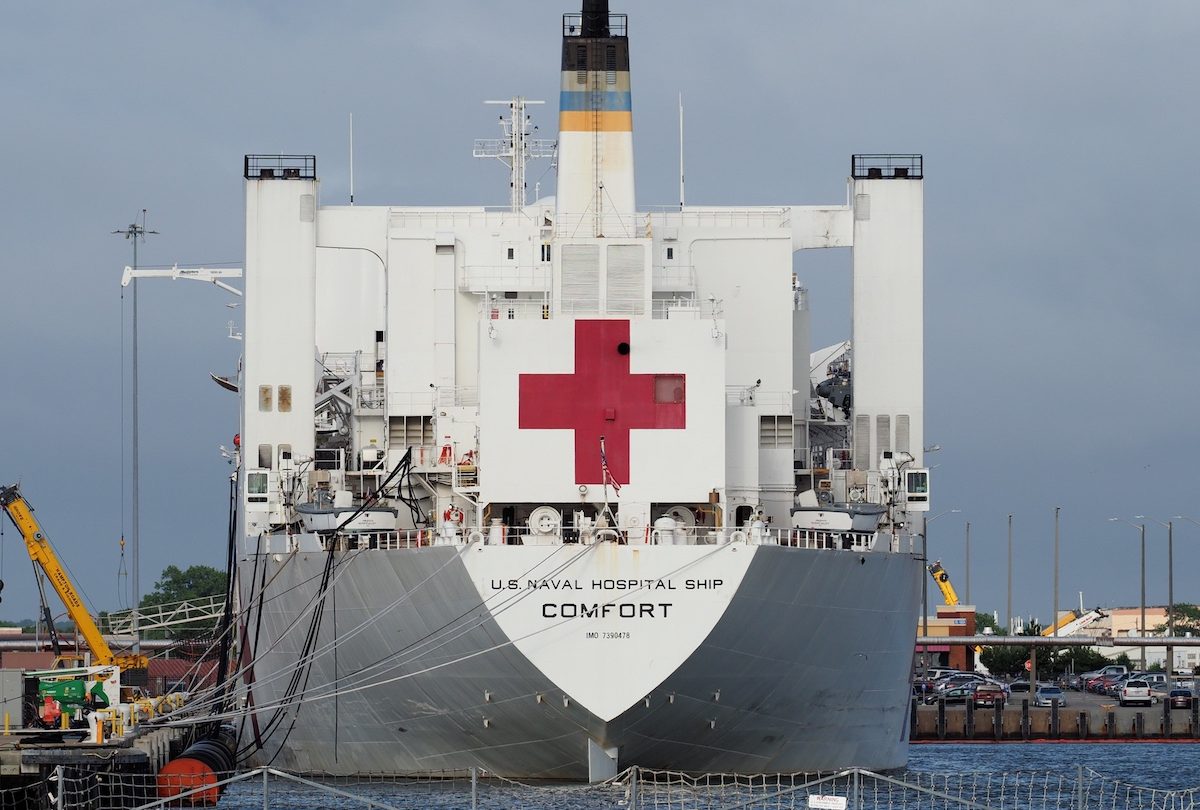 New York City over the past few days has become the epicenter for the coronavirus, a fact which shouldn’t come as a surprise given how densely populated the city is. Across the state, there have already been 40,000 confirmed coronavirus cases and nearly 1,000 deaths as a result.

Compounding matters is that hospitals in New York City simply aren’t equipped to handle the influx of patients they’re seeing. And with the number of coronavirus cases in the city still growing, the situation is poised to get worse before it gets better.

“Hospitals in New York are under siege—that’s probably the simplest way I can describe it,” a doctor told The Daily Beast recently. “We have never seen anything like this, and we are so unprepared for the need that seems to grow daily. Honestly, I’m terrified.”

To help alleviate the strain on city hospitals, a gigantic Navy hospital ship called the U.S.N.S. Comfort arrived in New York Harbor yesterday. The ship isn’t designed to treat individuals with the coronavirus, but will rather be used to treat patients — who can arrive via helicopter — with other ailments who can’t currently get the care they need in city hospitals.

For many, the existence of a floating military hospital came as a surprise, but the ship has been in use for more than 30 years at this point. Notably, the ship is not equipped for combat and has the singular purpose of treating patients. As a result, any attack on the ship would constitute a war crime.

As to the history behind it, the ship was previously an oil tanker before the Navy purchased it and converted it into a floating hospital in 1987. Since then, it’s been used to help treat soldiers wounded abroad. It’s also been used on a variety of humanitarian missions, providing treatment to individuals who need care in the wake of a natural disaster. For example, the U.S.N.S. Comfort was used to help treat individuals injured in the massive 2010 Haiti earthquake.

Some of the military deployments the U.S.N.S. Comfort participated in include the Persian Gulf War of the early 90s and the Iraq War in the early 2000s. Incidentally, it was also used as a hospital in the wake of the 9/11 attacks.

All told, the U.S.N.S Comfort has 1,000 beds, of which 80 are designated for intensive care. The ship also has 12 operating rooms, an intensive care unit, a burn care unit, an on-site pharmacy, and even distilling plants to convert seawater into drinking water.

She is a complete medical facility that even includes a dental clinic, four x-ray machines and a CT scanner. A pair of oxygen-producing plants, an optometry lab and coolers to hold 5,000 units of blood are all part of her tool box – Comfort is a hospital that can sustain up to 2,000 people onboard, crew combined with patients, and supply much-needed water to both as she maintained a fresh water plant making up to 300,000 gallons of water a day. Other onboard services include a satellite lab and a central area for sterile causality receiving. A medical supply depot, along with a well-stocked pharmacy, are all included. Due to the nature of her work she has a large laundry operations and her own morgue.

Of course, a floating hospital with more than 1,000 people living in close quarters could potentially be risky in light of how easily the coronavirus is able to spread. Consequently, the entire crew was reportedly sequestered for two weeks before being deployed.

Navy officials acknowledge that it will be extremely difficult, yet paramount, to ensure no one with coronavirus gets on board. The ship’s crew will not be allowed off the ship; there will be no visits into Manhattan and of course no trips to bars or restaurants for takeout. Ship personnel will be doing temperature checks and scans and are still working on additional ways to screen patients before they are allowed on board, officials said.

Incidentally, there are some other measures — outside of sending in the U.S.N.S. Comfort — that are being taken to help relieve the strain on NYC hospitals. Earlier today, for example, word surfaced that New York will start using the US Open tennis complex as a makeshift 350-bed hospital.

Looking ahead, we can only hope that these measures will be enough to keep New York City hospitals from being overrun for too much longer. The entire situation, however, is dynamic and there’s no telling when the number of new coronavirus cases will start declining. According to some medical experts, the coronavirus may force the entire city of New York to remain in lockdown mode until the end of May.