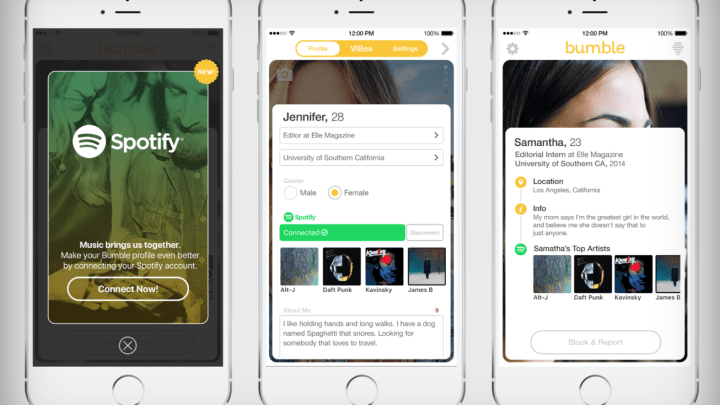 Popular Tinder lookalike Bumble has just announced a feature to help it (and you!) stand out in the online dating world: integration with your Spotify profile, so prospective hookups can see what you really mean when you say you have a “varied” taste in music.

Who thought this was a good idea again?

The integration almost seems like it’s designed to cause maximum embarassment: users can “connect their Spotify account to their Bumble profile to showcase the top artists they listen to most on Spotify.”

So, your most-streamed artists will be on instant display on your dating profile. I don’t know off the top of my head what my most-streamed artists would be on Spotify, but I’m certain there’s an embarrassing quantity of Abba and TaySway. Those aren’t my favourite artists — just whoever I’ll listen to in private, and never ever mention to someone I’m trying to sleep with.

I guess there are potential upsides, like helping you match with people who have a similar taste in music to you. But I also think that online dating is not supposed to be brutally, algorithmically honest. It’s the reason we can cherrypick photos, rather than having your five most recent Facebook uploads represent your entire life.

Of course, you can always use Spotify’s “private sessions” to listen to music, which is the auditory equivalent of living in an incognito tab in Chrome.

I’m happy to let people in on my guilty pleasure music habits, after one or three drinks. But for the same reason that you don’t invite strangers in coffee shops to view your internet history, I’m thinking this is a bad move.