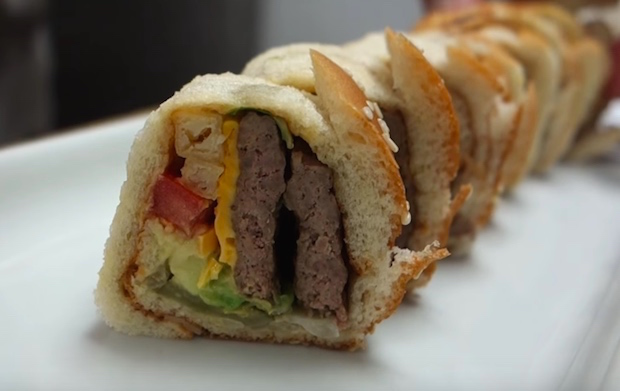 It’s crazy to think that people are still eating McDonald’s Big Macs the old-fashioned way — with their hands. It’s 2015, people! It’s high-time that we, as a society, step up and really refine some of our more antiquated eating habits. Yes, it’s time to inject a bit of sophistication into the traditional fast food experience. If you’re on the fence, I’m sure that this story of a guy who recently ate a stack of 10 McRibs at once will push you in the right direction.

Thankfully, we don’t need to go on this journey alone. Recently, master sushi chef Hiroyuki Terada put together a great video showcasing how he was able to turn an ordinary and boring Big Mac into an incredibly elegant, and dare I say, appetizing sushi roll.

The entire process begins as you might expect, with Terada thoroughly deconstructing the burger into its base components. Terada then proceeds to slice the bun into thin layers and the burger into small skirt steak-esque strips. Following that, he dices up some fresh tomato, grabs a few fries and adds a little bit of cilantro to class things up.

We won’t spoil the entire process for you, but there’s no denying that the seemingly simple transformation belies the true creativity – nay, genius – behind Terada’s impressive creation. With Terada topping things off with a drizzle of spicy mayo and some barbecue sauce, this is one Big Mac you might actually want to try.