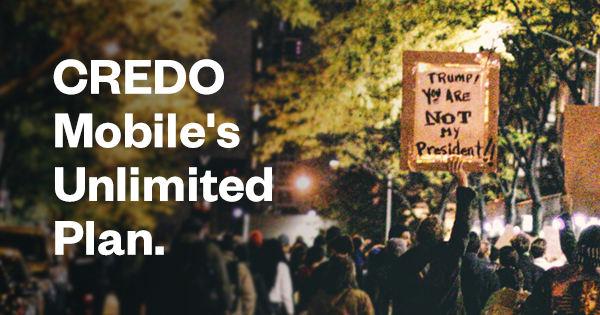 “Unlimited” data plans are all the rage this year. After T-Mobile debuted its mostly-unlimited One plan to a ton of splash last year, Verizon, Sprint, and AT&T all followed suit, and we’re now at the point where every major network has some kind of unlimited plan available.

But if you’re a shrewd little shopper, you will  hopefully have realized by now that there’s far more than four places to buy your wireless service. Mobile virtual network operators (MVNOs) are third-party companies that resell the Big Four’s service, often for cheaper. Credo Wireless, one of the more intriguing MVNOs, has just rolled out an unlimited plan that’s worth a look.

Credo runs on Verizon’s network, which means that you’re guaranteed the most consistent (and often fastest) network coverage that money can buy. The unlimited plan starts at $85 per month for one line, but falls way down to $40 per line if you have four lines on your account.

The pricing means it’s a little more expensive than Verizon’s own Unlimited plan for a single individual, but it offers worthwhile savings for a bigger group.

The terms of the contract are more or less the same as Verizon. It’s Unlimited in name only, as exceeding 20GB of data per month will see your speeds throttled. Verizon does something similar with its Unlimited plan, but the throttling limit is 22GB, and Verizon will only throttle your data if the network is congested.

Credo’s biggest claim to fame is that it’s an “ethical” network that takes overt political stances. Every time a user logs onto its network, it donates to a variety of charities like Planned Parenthood or Oxfam. The current strapline on its website is that it’s “the only carrier fighting Trump’s hate,” which should give you an idea of where it falls on the political spectrum.