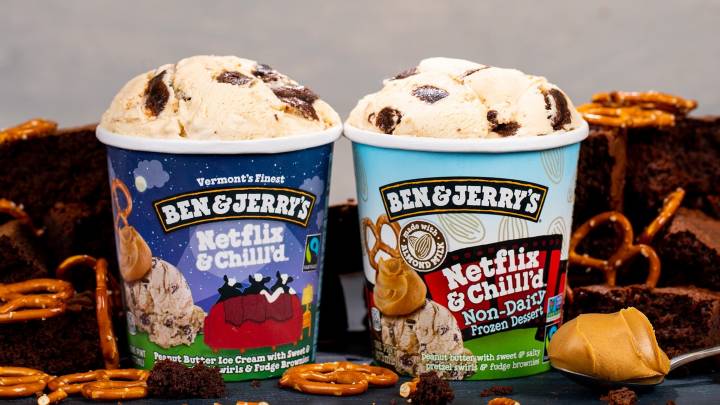 Netflix Originals come in all sorts of varieties — original movies, crime series, docu-series, comedies, you name it. And now, we can add Peanut Butter with sweet & salty pretzel swirls and fudge brownies to that mix. That’s because the Ben & Jerry’s ice cream brand has teamed up with the video streamer to produce the first Netflix original ice cream flavor that’s meant as a perfect complement to your next binge session. And, given that pun-filled flavor names are kind of a staple of Ben & Jerry’s, that’s exactly what you get here with the name of this new streaming-themed flavor: Netflix & Chill’d.

As we noted above, the flavor — the name of which is a twist on the popular phrase you might have heard of, but which we won’t explain here if you haven’t — is Peanut Butter Ice Cream with those extra elements of pretzel swirls and fudge brownies. There’s no official word yet on when it will be available to buy, but we do know a few other details. It will be available in the chain’s stores, as well as in groceries. It will also be available in a non-dairy version.

“We’ve teamed up with Netflix to churn up something extra special,” the company’s website announces. “And just like Netflix, there’s something in this pint for everyone.”

Appropriately, Ben & Jerry’s announced this new Netflix original ice cream flavor with a “trailer” you can watch above, and it includes nods to some of Netflix’s most popular original programs like Money Heist, Orange is the New Black, and Big Mouth. Along these same lines, Ben & Jerry’s decided to also take this opportunity to present some recommended pairings of existing Ben & Jerry’s flavors that would go great with certain Netflix original series. For example, “Ben & Jerry’s Flavor Guru” Sarah thinks the brand’s Peanut Butter Cup is a perfect complement to Netflix’s The Chef Show.

The latter features “an unlikely combination of ingredients [coming] together to create something better than the sum of its parts … I went to the same culinary school as [one of the hosts], so I really enjoy hearing him talk about his experiences and the chefs he learned from while there.”

You can read more about the pairings here, but they also include Milk & Cookies with The Chilling Adventures of Sabrina; Phish Food with Chef’s Table; and Half Baked with Grace and Frankie.