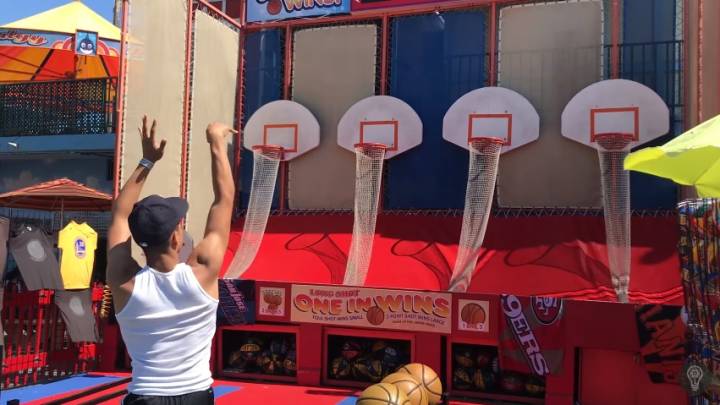 If you’ve ever been to an amusement park or a state fair, you’ve likely wasted more than a few dollars trying to win oversized stuffed animals by playing any number of carnival-style games. Whether your choice of poison is basketball or ring tossing, the one thread that seemingly ties all of these games together is that they’re all deceptively easy in theory but impossibly challenging in practice.

Hardly a surprise, the games themselves are designed to create a distinctly unfair advantage for naively confident participants. While this may not come as much of a shock, former NASA engineer Mark Rober recently spent many hours observing carnival games and illustrating why customers who blindly toss down a few dollars aren’t exactly getting a fair shake.

As a big basketball fan, and as someone who fancies himself a slick shooter, Rober’s take on carnival-based basketball games were pretty interesting. Specifically, Rober’s notes that a standard three-point line is 24 feet back from the rim, which itself is 10 feet long. The carnival version, however, is 28 feet back and players are shooting on a rim that’s 11 feet tall.

“Which is subtle,” Rober notes, “but if you have a deadly three pointer locked into your muscle memory, you will tend to miss short, which is exactly what we saw a bunch.”

While it’s still possible for players to win while playing basketball, there are a few games which are practically impossible for anyone to win. The entire video is super interesting and quite illuminating. You can check it out below, and the next time you’re keen on throwing a few bucks down on a seemingly easy carnival game, you might want to think twice.