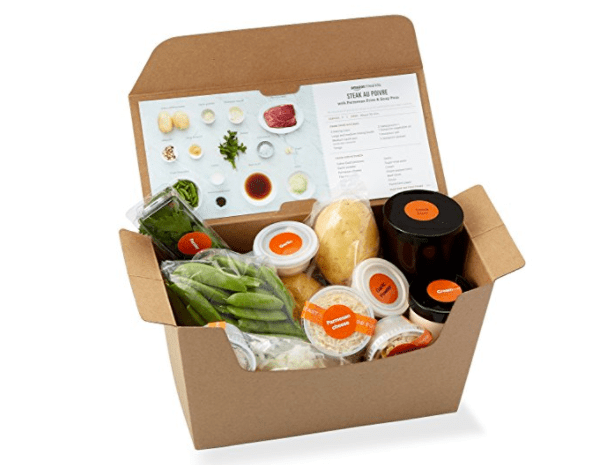 Amazon is expanding its war against all other forms of retail onto a new front: food. The internet giant has already announced its intention to acquire Whole Foods, but its foray into groceries won’t stop there.

The Meal Kits are an expansion of Amazon’s existing Amazon Fresh grocery delivery service, and right now they’re only showing up for Fresh members in select locations. The kits generally contain a full meal for two people, and come with everything you should need to cook, including all ingredients and a recipe.

GeekWire spoke to Josh Chadd, a Seattle-based systems engineer who has already had the opportunity to try a Meal Kit. He described his experience in terms that should have the Amazon PR’s mouth watering:

“The steak was an 8-oz. serving packaged by Corfini and was at least of USDA choice quality,” Chadd told GeekWire. “It was not an odd or awkward cut which is often the case with other services. The peas were very fresh with no blotches and tasted very sweet. The onion came pre-diced. It also came with fresh green peppercorns which I’ve never seen in another service even with a similarly named recipe. Overall the finished meal was a 9 out of 10 for any meal I’ve made at home even with my own ingredients.”

For now, the kits are only available to Amazon Fresh members in a few trial markets. Fresh membership costs $14.99 a month, which covers the cost of home grocery deliveries for members. Amazon does have a history of trialing new delivery options in a few markets before rolling them out nationwide, so depending on how the Meal Kits go, you might be seeing the option in your own Amazon store later this year.