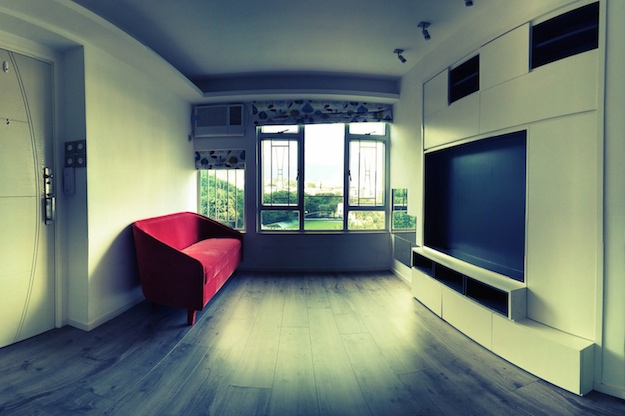 Airbnb was recently hit with a lawsuit after a couple who were renting an apartment in Irvine, California discovered that the owner had placed a hidden video camera – with a wide-angle lens, no less – behind a bookshelf in the living room. As if that weren’t frightening enough, the video camera was allegedly quite advanced; not only was it able to pick up both audio and video, but it was also configured to be controlled remotely.

DON’T MISS: How to watch the original Star Wars trilogy from before George Lucas altered it

Filed by Yvonne Schumacher of Germany, the lawsuit also names the owners of the apartment in question as defendants. According to the complaint, Schumacher and her partner Kevin Stockton had initially reserved the apartment from December 16, 2013 through January 12, 2014.

Immediately after moving in for what was supposed to be a relaxing three-week stay, things began to go awry. For starters, Schuchmacher discovered that the place was incredibly filthy, so much so that she filed a complaint with Airbnb. Not too long after, Schumacher and Stockton uncovered the video camera. Compounding the invasion of privacy is the fact that Schumacher claims to sleep and, at times, walk around in the nude.

Notably, while staying as a guest in the property, at night Mrs. Schumacher would sleep without any clothing, believing that with the front door closed and the window blinds drawn throughout the property, she was protected from prying eyes. This natural presumption proved to be incorrect.

Inasmuch as the master bathroom was so filthy, Mrs. Schumacher used the bathroom for the guest room, meaning that she walked naked through the apartment from the master bedroom to the guest bathroom. In doing so, she walked within full view of the property’s living room.

What’s more, the complaint articulates Schumacher and Stockton held many personal conversations in the living room, including discussions regarding the nature of their relationship as well as other and more intimate topics that couples are prone to talk about in private.

If true, the claims listed out in the complaint are absolutely horrific. Further, and as Schumacher articulates, the invasion of her privacy is arguably ongoing because there may be nude video footage of her floating around on the Internet somewhere.

Schumacher argues that Airbnb did not conduct a background investigation into the couple leasing out the apartment. As a result, she claims this type of behavior was sufficiently foreseeable as to render Airbnb guilty.

As a direct result of Airbnb’s inaction, Schumacher says that she was “subjected to a hostile, intimidating, and humiliating environment during her stay within the property.” The lawsuit is looking for money damages, punitive damages, and to top it all off, attorney’s fees.

“As a direct and proximate result of Airbnb’s misfeasance,” the complaint reads, “Plaintiff has suffered general damages, including, but not limited to, humiliation, shock, embarrassment, intimidation, physical distress and injury, fear, stress, and other damages to be proven at the time of trial.”

Clearly, this isn’t a good look for Airbnb. While the vast majority of Airbnb stays go off without a hitch and are actually quite pleasant (I’ve personally had nothing but great Airbnb experiences), it only takes a few headline-worthy stories to tarnish the company’s overall reputation.

Engadget nails it on the head when it writes:

One of the problems with the sharing economy is that it frequently bypasses most security checks in place of blind faith in people’s goodness. Now, mostly that’s turned out not to be a problem, but it’s clear that this lack of proper regulation is beginning to expose the industry’s dark side.

We’ll keep you posted as to how this legal saga unfolds. Historically, Airbnb has proven to be extremely accommodating in instances where either renters or lessors wreak havoc. For instance, this past summer a couple leasing out their house on Airbnb came home to a house covered in vomit and $75,000 in damages. Airbnb, to their credit, took care of all the repairs.