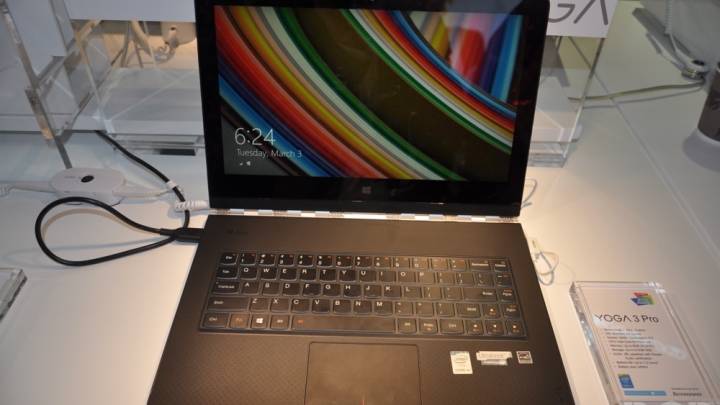 Not to long ago I wrote about the agonizing decision I will have to make this year: Namely, picking between the 12-inch Retina MacBook Air and the 12-inch iPad Pro. While it’s still too early to say what would be the better choice between the two, I’m definitely more excited right now about the slimmer MacBook Air model, and I have a Lenovo laptop to thank for it.

FROM EARLIER: Don’t expect Apple to unveil the Retina MacBook Air on Monday

Announced in early October last year, the Yoga 3 Pro Windows laptop/tablet is a device I had largely ignored until recently, even though it packs Intel’s highly efficient Core M processor, which will also be on the new MacBook Air. But luckily, I happened to run into one that was on display at Lenovo’s booth at MWC 2015 and briefly got to play with it.

The laptop is so thin and light that at one point I was actually afraid to break it while struggling with opening the lid again — you can use it in regular laptop mode, but also swivel the display around and close it on the other side to use it as a tablet. And it’s all possible thanks to the Core M processor that will be found in a variety of ultra-light and ultra-portable laptops in the future. The rumored 12-inch MacBook Air happens to be one of the laptops that’s supposed to have a Core M inside.

The 13-inch Yoga 3 Pro is amazingly svelte and should definitely be on your radar in case you’re buying a laptop anytime soon. The computer weighs just 1.19kg, and has a 12.8mm profile. Comparatively, the 13-inch MacBook Air is a bit heavier at 1.35kg and that has a profile that’s 17mm at its thickest point.

Thus, an Intel Core M-based 12-inch redesigned MacBook Air should be even slimmer and lighter than any previous “regular” 13-inch versions.

Not to mention that the Yoga 3 Pro appears to be a beast when it comes to specs. The laptop packs a high-resolution QHD+ IPS display (3200 x 1800 resolution), up to 8GB of LP-DDR3 RAM, up to 512GB SSD, JBL speakers, and runs Windows 8.1, upgradeable to Windows 10. The same sort of high-end specs should probably be expected in any Intel Core M-based computer, including the yet-to-be-announced 12-inch MacBook Air.

Of course, the one major drawback is that Core M laptops will be rather expensive at first. And if we know anything about Apple’s pricing strategy, we’re sure the Core M-equipped MacBook Air will be the most expensive one on the market when it launches.

More images showing the Yoga 3 Pro, which is already available in stores, are available below.