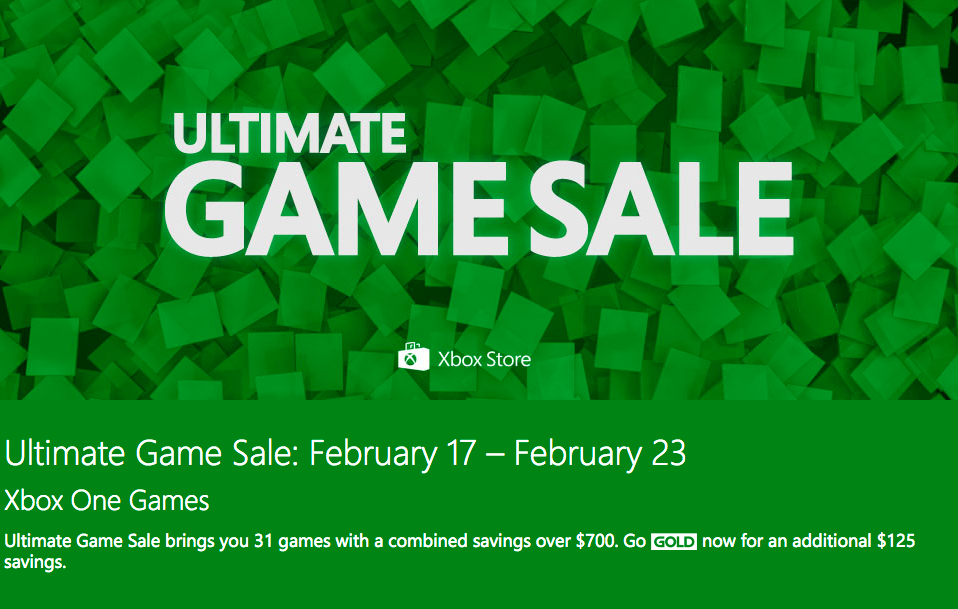 Video games are expensive. Thankfully, Microsoft puts new games on sale every week through its Deals with Gold program, but this week, the Deals with Gold are just the tip of the iceberg. Beginning on Tuesday, Microsoft kicked off a promotion it’s calling the Ultimate Game Sale, featuring huge discounts on dozens of games for Xbox One and Xbox 360.

MORE DEALS: 7 awesome paid iPhone apps that are free for a limited time

According to the official page, the sale will last from February 17th – February 23rd. The discounts will be available to both Xbox Live Gold and Xbox Live Silver members, but Gold subscribers will receive significantly steeper discounts. Overall, the Ultimate Game Sale could potentially net you over $700 in savings ($850 if you’re a Gold member).

There are also a huge number of Xbox 360 games on sale, including Dark Souls, Watch Dogs, Destiny, Just Cause 2 and Halo 4. A majority of the Xbox 360 games are receiving at least 60% cuts as well, so if you’ve been looking to stock up on last-gen games, this might be the best chance you get all year. Be sure to check Major Nelson’s blog for the full list.

The sale was originally going to go live on Wednesday, but Microsoft apparently decided to bump up the date after the information leaked online over the weekend. Most of the leaked information was correct, but we still haven’t seen the weekend-specific deals, which will most likely include Halo: The Master Chief Collection, Killer Instinct, The Walking Dead Season 1 and 2 bundle and the Shadow of Mordor season pass.