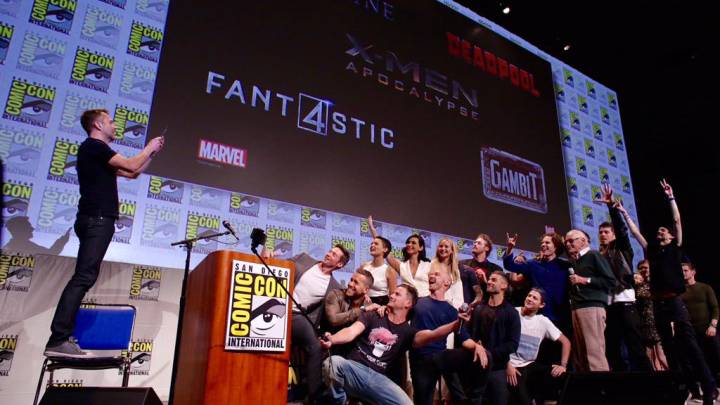 This year’s San Diego Comic-Con was as exciting as ever, but there was one interesting omission — Marvel Studios didn’t show up to discuss its upcoming slate of movies. No Captain America: Civil War, no Guardians of the Galaxy Vol. 2 and definitely no Infinity War. Instead, 20th Century Fox had to fill in the blanks with its own Marvel characters.

The panel kicked off with the cast and director of Fantastic Four, the gritty reboot that’s coming to theaters next month. Not much hype has been surrounding this release, but according to those in attendance, the trailer was far more promising than anything the studio had showed before.

That trailer hasn’t made it online yet, but once the Fantastic Four team left the stage, Ryan Reynolds and the cast of Deadpool took the stage, and some rule-breaking fans couldn’t stop themselves from sneaking a few videos.

What follows is the first official trailer for Deadpool, a movie that many comic book fans never expected to see. Reynolds told fans on Twitter that “the VFX shots aren’t done yet,” but a high quality version of the trailer should arrive within the next three weeks. Until then, here’s what everyone saw at Comic-Con (NSFW language):

Finally, Hugh Jackman walked out to talk about his time as Wolverine in the X-Men films. After a short while, director Bryan Singer and the rest of the cast of X-Men: Apocalypse joined Jackman in order to introduce a short teaser trailer for the 2016 film:

There you have it — two of the most highly anticipated Marvel movies, and neither one is coming from Marvel Studios. The image you see at the top of the post is Fox’s full Marvel lineup, which includes a third (and final) Wolverine movie and a feature for Channing Tatum’s Gambit.

Hopefully the studios won’t take too long to officially release these trailers.