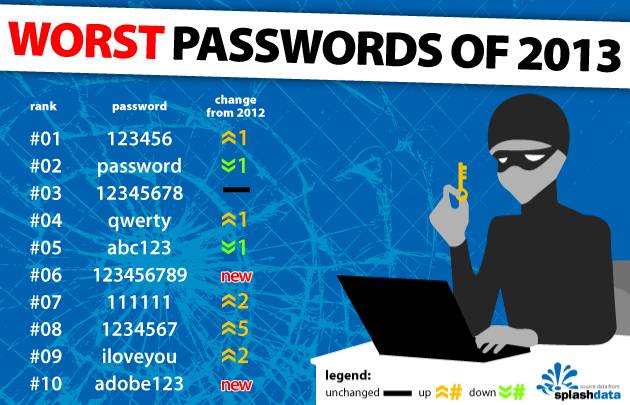 New research conducted by SplashData revealed that “password” isn’t the dumbest password choice around anymore, as it has been replaced by “123456,” for the past year. However, “password” fell only one position compared with 2012, basically switching places with “123456.” The list of weak passwords includes various other obvious combinations such as “qwerty,” “iloveyou,” “1234,” “111111” and “000000.” Passwords such as “adobe123” or “photoshop” also made the top 20, revealing that many Internet users may choose passwords that are similar to the services they’re logging into.

“Seeing passwords like ‘adobe123’ and ‘photoshop’ on this list offers a good reminder not to base your password on the name of the website or application you are accessing,” SplashData CEO Morgan Slain said. “Another interesting aspect of this year’s list is that more short numerical passwords showed up even though websites are starting to enforce stronger password policies.”

The popularity top of bad log in security choices among Internet users has been compiled using data from lists of hacked accounts containing millions of stolen passwords posted online last year. The top 25 worst passwords of 2013 follows below.