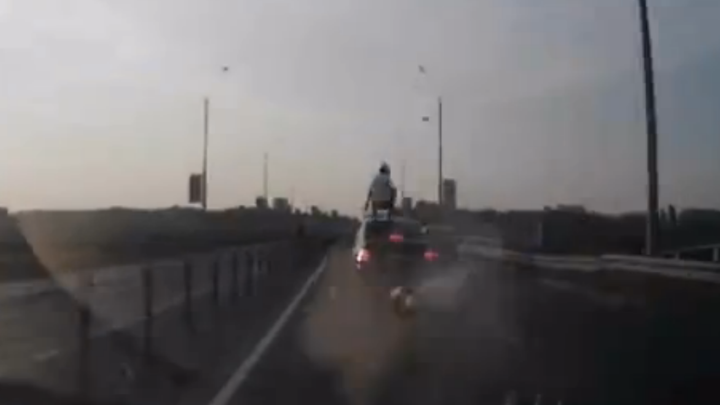 While we’ve been wowed all year by various GoPro videos that give us a first-person perspective of incredibly crazy situations and stunts, there are times when showing something from a third-person perspective is really the only way to do it justice. That’s definitely the case with a new video that’s popped up on LiveLeak that shows a motorcyclist who survives crashing into the back of a car in a miraculous way.

The accident, which occurred on a highway in Belarus, happened when a car switched over into the left-hand lane just as a motorcycle was making the same maneuver at a much higher speed. The result should have been tragic but instead it was incredible — upon hitting the back of the car, the cyclist did a full flip in the air and somehow landed feet first atop the car’s roof. The car then stopped to give the cyclist the chance to get off. While the cyclist survived seemingly unscathed, however, his motorcycle wasn’t quite so lucky and was reduced to a pile of smoking rubble on the road.