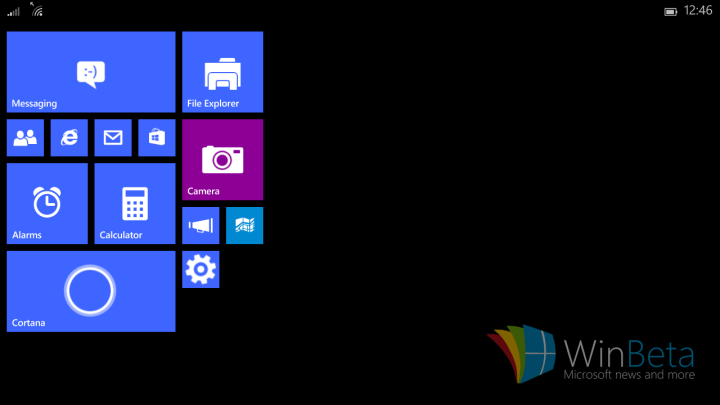 Earlier this year, Microsoft announced that small tablets would be outfitted with a different Windows 10 interface than the one on larger devices, something more along the lines of the Windows Phone UI. Up until now, we’ve only been able to speculate as to what it would look like, but a recent leak may have outed the unseen version of the upcoming operating system.

READ MORE: How to access the secret hidden menus on your iPhone or Android phone

WinBeta shared a few images of the small tablet OS on Tuesday, along with some first impressions after getting hands-on time with the software. Although the interface looks a little odd at the moment, we have to keep in mind that the final product could look significantly different from this early prototype.

“The new Windows 10 apps are designed to scale at almost all screen sizes,” says WinBeta’s Zac Bowden. “When running on Windows 10 tablets, this is no different. Apps like Calculator and Voice Recorder take advantage of the extra real estate, displaying the apps as if they were desktop apps instead of phone apps.”

There’s also easy access to a quick menu at the bottom right corner of the display, represented by three dots. The options in this menu can change depending on which app is currently running.

The build that Bowden tested was apparently compiled in March, so we should expect to see a more finalized version of the OS at Microsoft’s Build Developer Conference at the end of the month.

For more images and a detailed rundown of the software, be sure to check out WinBeta’s article.