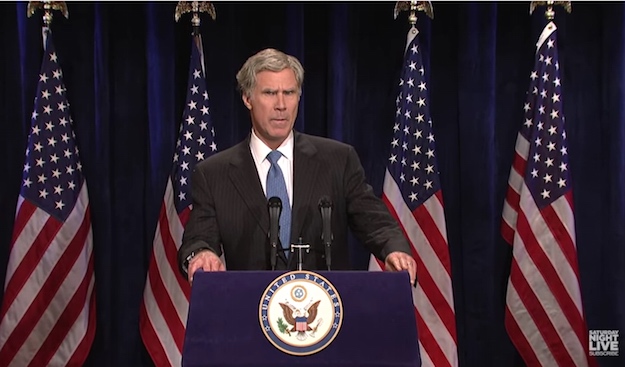 Thanks to a lineup of quirky and controversial candidates, the current run-up to the 2016 U.S. Presidential election has been both bizarre and entertaining. But more than that, it’s been wholly impossible to ignore, and in turn, all too easy to parody to great comedic effect.

With presidential hopefuls like Donald Trump and Bernie Sanders still in the mix, the talented writers over at Saturday Night Live have had a whole lot of fodder to work with lately. Not only did they have Donald Trump host the show a few weeks back, but they’ve started bringing back Larry David (a former writer on the show) for his impeccable and hilarious Bernie Sanders impressions.

With the U.S. Presidential election now less than a year away, SNL over the weekend brought back one of its most beloved cast members of all time to reprise one of his most iconic roles – Will Ferrel as George W. Bush.

Slotted in the show’s cold open, the sketch saw Ferrell take the podium and announce his candidacy for the Oval Office.

“The field of Republicans is so messed up, I figured, it makes you miss me, doesn’t it?” Ferrell began. “And that’s saying a lot.” And next thing you know, Ferrell broke out into a nice rendition of The Fugees’ hit-song Ready or Not.

Over the course of the sketch, Ferrell goes through a list of all the Republican candidates and quickly explains why they’re not qualified to be President, all while employing some well-placed self-deprecating humor.

For instance, this was Ferrell’s take on Marco Rubio and Ted Cruz: “Cruz and Rubio. Rubio and Cruz. Sounds like a Miami law firm. If you’ve been injured on the job, call Rubio and Cruz…”

Check out the full video below, it’s definitely worth a few laughs.