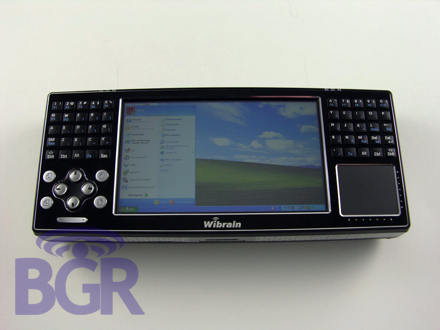 Here we have the WiBrain B1. It’s a new UMPC that features a 1.2GHz intel processor, 1GB of RAM, a 60GB HD, and Wi-Fi and Bluetooth. Why does that really matter? Well, remember how UMPCs were supposed to “affordable”? This one is priced at $849, which we can’t argue with! It uses the split QWERTY thumb pad arrangement that the Samsung Q1 Ultra uses, but in our usage, it worked pretty well. Let’s not fool ourselves, it took some getting used to, but the buttons were placed and sized nicely, with awesome tactile feedback. See that word, UMPC / mini-Computer makers? Tactile. This has it, and even has a pop-up webcam with built-in mic which was pretty cool. The screen looked gorgeous with a 4.8″ 1024×600 resolution, so the unit is definitely wide. It’s a real UMPC, so that’s to be expected. We were completely pleased with the unit, found it to be light and easy to use and navigate (especially since it uses a touch-pad for the mouse), and the price makes it all the more appealing!

UPDATE: It uses a VIA processor, not Intel!

Check out the WiBrain B1 unboxing photos in our gallery!