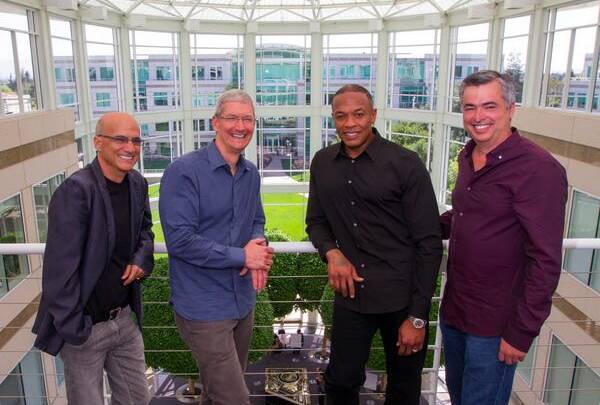 Apple’s Beats acquisition was made official on Wednesday, following weeks of speculations regarding Apple’s reasoning behind such a decision. Apple’s top exec Eddy Cue and Beats’ Jimmy Iovine talked to Re/code co-founders Walt Mossberg and Kara Swisher at the their Code Conference on Wednesday night, revealing why the company spent $3 billion on Beats, its largest acquisition to date.

The exec said that Beats has done “an amazing job of making the audio [for headphones] and making it sound incredible,” whereas the Beats Music service is subscription music “done right.” These are good enough reasons for Apple to purchase Beats and not have to develop its own speaker/headphones or build a music streaming service from scratch.

“We don’t do everything,” Cue said. “We try to do a few things. We think Beats’ talent can accelerate us. It was a no-brainer. This isn’t something that just happened overnight. Jimmy and I have talked about working together for a decade.”

The Beats exec, who will join Apple together with Dr. Dre and report to Cue for the music streaming business and to Phil Schiller on the hardware side, added that Beats Music currently has 250,000 paying subscribers, and that five million people have already given Beats Music a try.

But in order to succeed, Beats needed a partner. The company tried to do that with HTC, but the Taiwanese Android device maker was not a fit for what Beats wanted to do. “It was really a culture clash,” Iovine said “It crashed and burned. It didn’t work out.”

Iovine tried to sell Beats to Apple for a few years, and chose HTC’s $300 million offer in 2011 because Apple wasn’t ready to move forward with a deal.

“I asked these guys forever! These guys make deals like they make products [Makes painstaking wrenching motion],” Iovine said, without revealing who approached who for the deal, as he’s now an Apple employee.

“How does somebody date for 10 years and then get married? All of a sudden it just happens,” the Beats exec said.

“The time wasn’t right,” earlier Cue said. “We were busy.”

Tim Cook, Apple’s CEO, announced the Beats acquisition to his employees in a memo, which is available here.