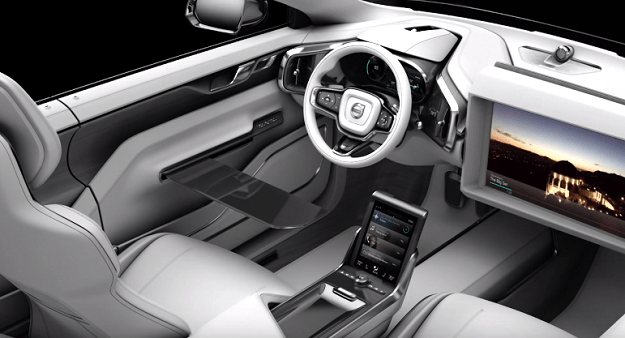 Most concept cars, in an effort to give us a glimpse of our driving future, focus almost exclusively on wildly imaginative and outlandish exterior designs. More often than not, these concepts, while cool, are a little bit too outlandish to be taken seriously.

Earlier this week, during the Los Angeles Auto Show, Volvo decided to flip the script entirely. Instead of focusing on the exterior, Volvo rolled out an “interior design concept” that, while decidedly futuristic, is something you can actually imagine driving sometime in the not-too-distant future.

Dubbed Concept 26 (with 26 minutes being the duration of the average daily commute), Volvo’s take on what the car of the future is going to look like is unbelievably cool. Naturally, the entire design is built around autonomous driving and what drivers might be able to do when they don’t need to keep their eyes on the road at all times.

The basis of this concept interior are the tri-mode seats. While driver-controlled cars might get Eco, Normal, and Sport modes, the Concept 26’s seats can be set in Drive, Create, or Relax mode. Drive is, rather obviously, what you’ll use when you want to do some steering or stomp on some pedals. It’s a proper driving position, compared to Create or Relax. The former telescopes the steering wheel in, slides the driver’s seat back and pops out a handy little tray table, while the latter will slide the seat back and an ottoman will deploy. In the two driverless modes, the center console will slide back as well, keeping drivers in touch with the excellent Sensus infotainment system. For passengers, meanwhile, a rather sizable display will fold out of the dash.

But to really appreciate the ingenuity of what Volvo came up with, you have to check out this video.

A more in-depth video about Concept 26 and the future of autonomous driving can be seen below. It’s well worth checking out.