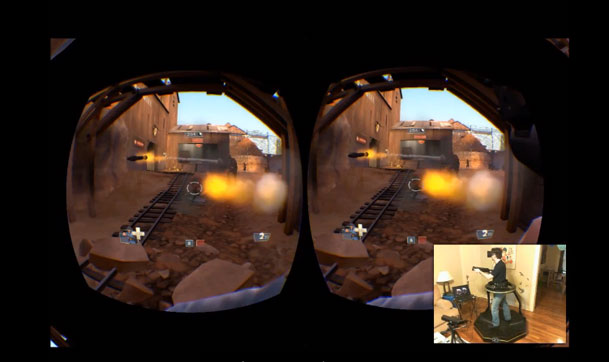 The user becomes fully immersed in the game, using Virtuix’s passive treadmill to move and a gun-like controller to fire on enemies. Then, the Oculus Rift completes the virtual reality experience thanks to its dual head-mounted displays that provide a 110-degree viewing angle.

The experience offered by the Omni and Rift is something next-generation video game consoles like the PlayStation 4 and Microsoft’s upcoming next-generation Xbox obviously can’t even come close to competing with out of the box. A head-mounted 3D virtual reality device coupled with an omnidirectional passive treadmill places the user inside the game. The gamer can walk, run, turn and look around as if he or she is inside the complex new world created by each video game.

The Oculus Rift, which began as a crowd-funded project on Kickstarter, is now available for preorder and Virtuix is currently preparing a Kickstarter campaign to help fund the Omni.

The video demo follows below.