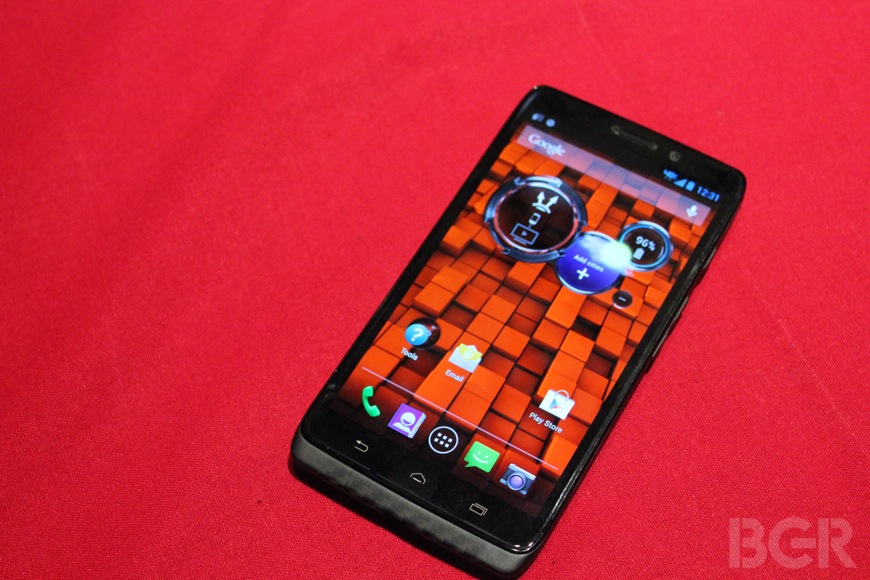 Motorola and Verizon teamed up and introduced three new Droid smartphones at a press conference on Tuesday. The Droid Mini, Droid Ultra and Droid Maxx are each equipped with a 720p display, 1.7GHz dual-core Snapdragon S4 Pro processor with a customized X8 mobile computing system, 2GB of RAM, a 2-megapixel front-facing camera and a 10-megapixel camera on the back, which can be activated with a simple twist of the wrist. All three devices feature a unibody design and what Motorola calls a “3D fiber weave Kevlar pattern” on the back.

The difference between the devices lies within their respective screen and battery sizes. The Mini is equipped with a 4.3-inch display, while the Ultra and Maxx have a 5-inch screen. As for battery sizes, the Mini and Ultra deliver 24 hours of battery life with 2,000 mAh and 2,530 mAh batteries, respectively. The Maxx is a true champion with its massive 3,500 mAh battery that is capable of delivering 48 hours of usage, according to Motorola.

Google’s influence at Motorola is visible in the design of the new Droids, which are incredibly slim and compact despite their impressive battery life. The Ultra is the thinnest 4G LTE smartphone on the market in fact, measuring a mere 7.18mm thick, while the Mini and Maxx are 8.9mm and 8.5mm thin, respectively. All three models run a nearly stock version of Android 4.2.2 Jelly Bean and include small, and welcomed, tweaks from Motorola. The software includes a variety of improvements to the camera and features such as Droid Zap, Motorola Connect, Active Displays, and the ability to access Google Now at any time with the phrase “Ok Google Now.”

The camera app includes a variety of settings that can be accessed with a swipe to the right. Users can also use a feature known as Droid Zap to share photos with friends, which can be done with a two finger swipe gesture upwards. Photos are sent to a personalized cloud account that can be accessed by other Droid-branded smartphones within a 300-foot radius for 60 seconds. To pull images from the cloud, users can perform a two-finger swipe gesture downward.

Motorola Connect is similar to the Android application Mighty Text. After installing a Chrome extension on their computers, users will be able to read and reply to text messages and see incoming calls even when their phone is not by their side. Lastly, the new Droids feature an Active Display, which means the display will pulse to reveal the time and various notifications.

These phones are impressive, period. This is the new Motorola and I like it.

Unlike the HTC One mini and Galaxy S4 mini, the Droid Mini doesn’t skimp on the specs. Motorola is delivering three premium devices that will appeal to a wide variety of users. They aren’t perfect, however ‚ the Ultra and Maxx are equipped with large 5-inch displays that are only 720p, and all three devices are fingerprint magnets from front to back.

Plus, we still have the Moto X on our minds.

Verizon’s new Droid Ultra ($199), Droid Maxx ($299) and Droid Mini ($99) are available for preorder beginning on Tuesday and they will start shipping on August 20th. In the meantime, be sure to check out all the hands-on images in our photo gallery.