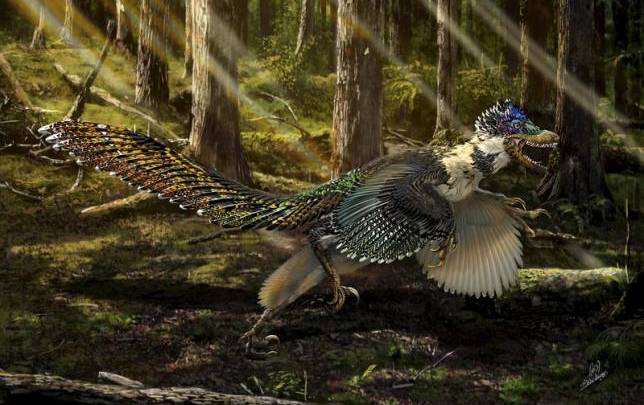 A recently discovered dinosaur in China that’s been nicknamed the ‘fluffy feathered poodle from hell’ would make a great new Jurassic World attraction, considering how the park regularly needs to come up with new material for its ever-more demanding guests. The raptor in the image above is named Zhenyuanlong suni and roamed Earth with wings some 125 million years ago during the Cretaceous Period.

DON’T MISS: All 39 Marvel movies ranked from best to worst by Rotten Tomatoes

The Zhenyuanlong suni is a raptor that’s a distant cousin of the Velociraptor, which lived 40 million to 50 million years later. Despite having wings that make it the largest winged dinosaur to date, the scary fluffy bird did not fly – or at least that’s what scientists believe.

A massive beast, measuring 6 feet (1.8m) in length, the Zhenyuanlong suni was a fast-running meat eater. The wings were used either for brooding eggs in the nest or for show, just like a peacock uses them.

“If you saw this wing on its own, you would probably think that Zhenyuanlong could fly,” University of Edinburgh paleontologist Steve Brusatte told Reuters. “But it’s a fairly big raptor, and its arms are so short in proportion to its body, that I have a hard time believing that it could fly or glide or do anything in the air.”

Finding this curious animal, which was preserved very well in a nearly complete fossil in northeastern China, raises questions about the evolution of feathers and wings.

“Did they evolve specifically for flight? In that case, Zhenyuanlong perhaps descended from a flying ancestor, and that’s why it still has wings,” Brusatte speculated. “Or, alternatively, did wings first evolve for display or egg brooding or some other type of function, and then only in some dinosaurs were they later co-opted into airfoils for gliding and flying?”

Whatever the case, the ‘fluffy feathered poodle from hell,” as the paleontologist called it, isn’t a dinosaur you’d want to have on your tail.