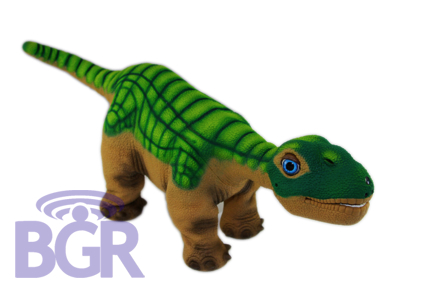 Pleo, meet the BGR family. BGR family, meet Pleo. Pleo is a “life form” developed by alien company UGOBE. They’ve genetically engineered dinosaurs using animatronics, a cloned sheep named Dolly, and frog DNA. The result is a lovable baby dinosaur. To get serious, Pleo actually has a ton of tech inside it. Some of it is a color camera, binaural microphones, ground sensors, shoulder sensors, force feedback sensors, and a whole lot more. When you first turn it on, it’s in the “hatchling” stage. That lasts around 5-10 minutes depending on how much you interact with it. After that, it’s on to the “infant” stage where Pleo will explore its surroundings. Finally after that, Pleo is as old as it gets with the “juvenile” stage. But from there it’s all on you and how you treat it. Something tells us if you hang it upside down by its tail all day long while playing Jurassic Park on your TV, it’s going to grow up to be a mean son of a bitch. You know you want to see more of Pleo in our gallery!