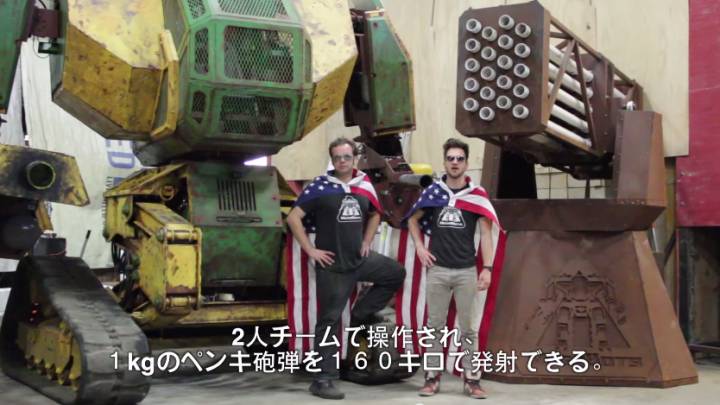 It’s the moment robot fan boys have been waiting for. American firm MegaBots, which builds giant fighting robots, is gearing up for an epic battle against a creation from its Japanese rival Suidobashi Heavy Industry.

San Francisco Bay area-based MegaBots threw down the gauntlet in a YouTube video last month, pitting its 12,000-pound Mark II robot against Suidobashi’s Kuratas machine. “You have a giant robot, we have a giant robot – we have a duty to the science fiction lovers of this world to fight them to the death,” growled MegaBots, in a YouTube post accompanying the video. “Prepare yourselves, and name the battlefield. In one year, we fight.”

Described by MegaBots as “12,000 pounds of gasoline-powered fury,” the 15-foot Mark II carries two human “pilots” and can fire 3-pound paint cannonballs at speeds of over 100 mph.

The fight, however, must be hand-to-hand, according to Kurata. “Just building something and sticking guns on it – it’s super American,” he added. “We really need … melee combat. If we’re gonna win this, I want to punch them to scrap and knock them down to do it.”

MegaBots told FoxNews.com that Mark II will engage in hand-to-hand combat with Kuratas when the robots battle next year. “We are really excited that our challenge has been accepted by the Kuratas team and even more excited by the public’s response,” said MegaBots co-founder Brinkley Warren, in an email. “It’s clear that the people of the world are hungry for giant human-piloted robots as the future of sports.”

The Mark II has a size and weight advantage over the 9,000-pound 13-foot Kuratas, which carries a single pilot.