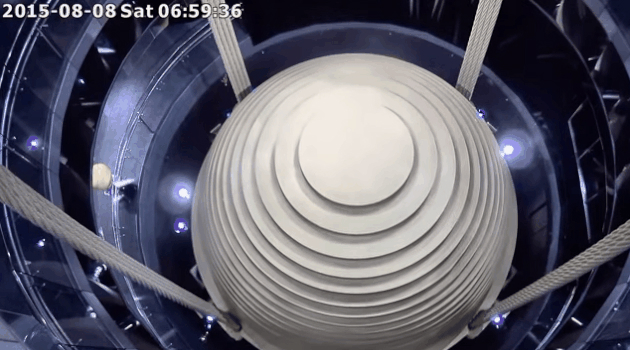 What happens when a horrendous typhoon like Soudelor hits land? We’ve seen already that the typhoon’s winds are strong enough to lift Boeing 747 airplanes off the ground. And now a new video shows the typhoon is powerful enough to move a 720-ton steel ball (let’s call it a mass damper) suspended atop of a skyscraper (let’s call it Taipei 101, one of the world’s tallest buildings, measuring 1,651 feet).

This particular ball is suspended between the 87th and 92nd floors and has a diameter of 18 feet. Its mission is simple: To prevent the top of the building from moving in any direction when high winds are blowing at the base of it, or during strong earthquakes.

Well, the top of the building does move even with a mass damper in place, but humans shouldn’t even perceive it, as the massive weight of the steel sphere counteracts the building’s movement.

Typhoon Soudelor blew so strong that it set a new record for the most extreme movement of a mass damper. The wind moved the steel ball by more than three feet, which is a lot more than what it would usually move.

A video showing Taipei 101’s crazy mass damper movements as Soudelor hit the country follows below – more details about how this skyscraper technology works are available from Popular Mechanics and The New York Times.