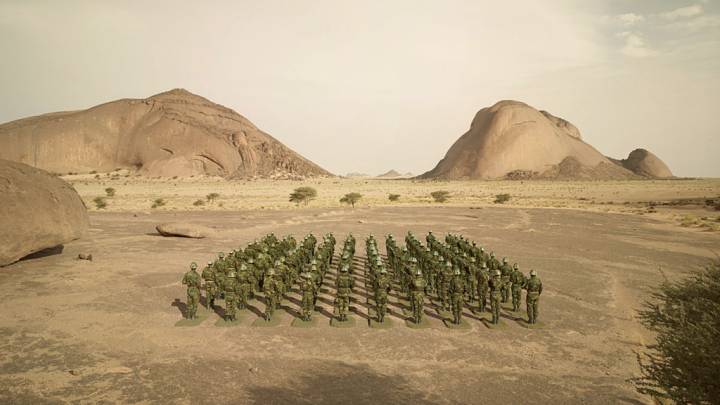 Thinking about toy soldiers might conjure up fond memories from your childhood, but one photographer set out to reimagine the tiny toys by using them as inspiration to create stunning scenes that leave viewers questioning what they’re really seeing.

However, these photos actually show real soldiers in a zone that has seen plenty of military action since the 1970s. Western Sahara has a tumultuous history and has been the source of a dispute between the Polisario Front and Morocco since the 1970s, Wired reports.

“[My goal is] to visually arrest a viewer via the blurring of boundaries between what is real and what is not,” Thorpe said. “To inspire engagement through a fresh approach to the depictions of conflict that we [the audience] have become so numb to.”

The Toy Soldiers project has been turned into a book that’s already available on Amazon. The photographer worked for two years on the project, choosing real Polisario Front soldiers for it.

Working in the desert was “brutal,” Wired notes, as everyone had to face high temperatures and travel constantly. The photographer used a large format camera and a wide-angle lens to capture the amazing pictures, while soldiers wore their own uniforms and stood on flattened oil barrels to replicate toy soldiers.

Some of Thorpe’s Toy Soldiers pictures follow below, with more available at the source links.