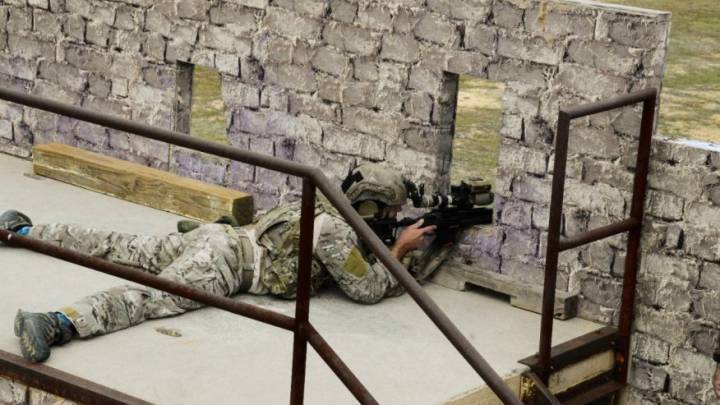 Top sniper teams from the U.S. Army, Navy and Marines went head to head last week – but who proved they were the best?

The annual competition is five grueling days designed to test the world’s best snipers to the limit. Some 25 teams took part in 21 incredibly difficult events during the competition, which ran from March 20 through March 25.

Foreign allied special operations forces units including teams from Singapore, Kazakhstan and Ireland joined American snipers to battle it out for the title. Ireland took the winning title at Fort Benning’s 14th annual International Sniper Competition last October, but did not repeat their success this year.

The 1st Special Warfare Training Group (Airborne) hosts the competition, together with the Special Forces Association-Chapter 62. The Special Forces Charitable Trust provided further support, along with other sponsors.

Why pit sniper against sniper?

Testing the skills of the world’s best reveals how everyone stacks up, but it is also an important opportunity to sharpen skills and learn from each other. Special Forces Association (SFA) Chapter 62 Treasurer and Co-owner of Spartan Blades Mark Carey explained that the competition is designed to “test the combat skills of our units and allies, with a good competition this promotes individual and unit training throughout the year.”

For the sniper instructor cadre, the competition helps keep training relevant. It also means that knowledge gained in battle by different sniper units across the forces can be harvested and incorporated into the instruction of Special Forces snipers.

The SFA helps get sponsors for the event, hosts a lavish banquet and obtains prizes that act as a further draw for top competitors.

The challenges are drawn from real special operations soldiers’ combat experience. They are incredibly difficult, always varied designed to challenge the most accomplished of snipers.

Related: High-tech sponge can save lives in less than 20 seconds

The snipers had to engage targets ranging from 25 meters (82 feet) to 1,000 meters (3,280 feet) while moving through urban environments and tackling tactical challenges.

Snipers faced these challenges while battling against variables like distance and unknown circumstances. To succeed, snipers needed to not just shoot accurately but also communicate effectively and efficiently with each other.

All this had to be achieved while racing against the clock.

While teams vied for the prestige of winning top honors, amazing prizes were also up for grabs. These include sniper rifles made by LaRue Tactical and NEMO Arms, optics by FLIR, MilSight and Night Force Scopes, and sophisticated shooter technology such as Kestrel Weather Elite Meter with Applied Ballistics.

Snipers could also check out and try a wide range of state-of-the-art sniper gear from nearly 70 vendors.