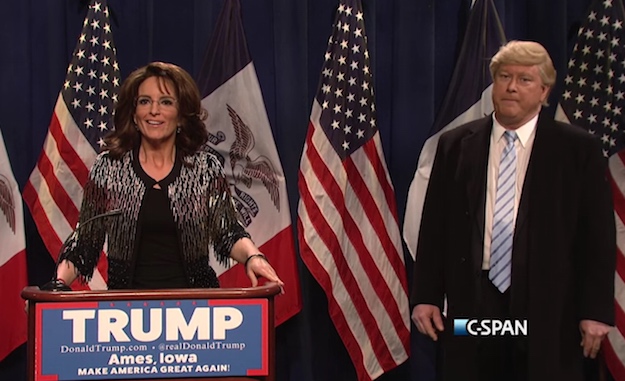 The run-up to the 2016 presidential election is the gift that just keeps on giving. With characters like Donald Trump and Bernie Sanders in the mix, the ongoing contest for the Oval Office has been nothing short of a goldmine for comedians.

And just when you thought that things couldn’t get any better, Sarah Palin last week decided to pop-in and endorse Trump for President, a turn of events that Stephen Colbert lampooned brilliantly last week. Over the weekend, Saturday Night Live also got in on the action with a hilarious spoor of Palin’s Trump endorsement. And the icing on the cake? Tina Fey made a cameo appearance during the show’s cold open where she reprised her Sarah Palin character.

For anyone who viewed the entirety of Palin’s endorsement of Trump, Fey’s impression, not surprisingly, is spot-on and replete with no shortage of clever barbs.

In one particularly great bit, Fey made fun of Palin’s affinity for a well-placed rhyme.

“I’m here for all you teachers and teamsters, you farmers and charmers, whether you’re a mom or 2 Broke Girls or 3 Men and a Baby, or a rock ‘n’ roller, holy roller, pushin’ a stroller, pro bowler with an abscessed molar….”