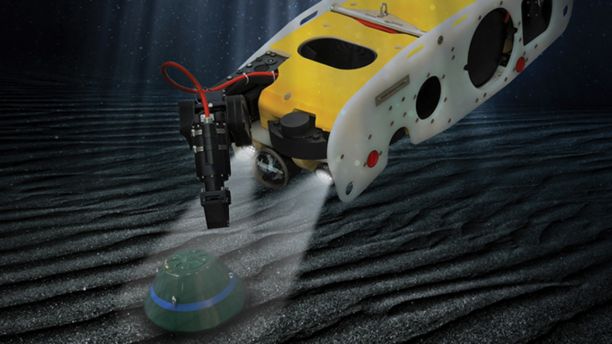 The sea wasp, a kind of jellyfish, can kill people in as little as three minutes by wrapping them in ten-foot-long tentacles and inflicting stings all over the body, injecting them with a potent and extremely painful venom.

Saab has developed technology named after this terrifying creature— in the form of a robot that will be able to discover and tackle bombs hidden underwater off U.S. shores and near American vessels.

To test its Sea Wasp technology, Saab has partnered with the Combating Terrorism Technical Support Office. The U.S. Navy Explosive Ordnance Divers Group 2, the FBI Counter-IED Section, and the South Carolina Law Enforcement Division’s Counter-Terrorist Operations Maritime Response Unit will all be testing the Sea Wasp over the next 10 to 12 months.

The threat of improvised explosive devices underwater continues to grow. This is a threat not just to U.S. Navy vessels, but also to commercial and civilian ships.

There has been plenty of media coverage about IEDS (improvised explosive devices) used by terrorists and other adversaries on land, but they are also frequently used at sea. Just as there are minefields on land, so are their minefields in the seas, both underwater and on the surface.

By locating and defeating bombs hidden underwater, the Sea Wasp can increase safety for military, commercial and civilian vessels.

And since the Sea Wasp can dispose of IEDs while being operated by two people at a remote site, it creates a safe distance that reduces risk to personnel.

What does it do?

Sea Wasp is what Saab calls a Waterborne Anti-IED Security Platform. Basically, it is a robot that can travel underwater to identify and defeat bombs. And it has been specifically designed to handle the challenging conditions human EOD divers routinely face.

Sea Wasp can help protect civilians near marinas, jetties, harbors and docks as well those out in open water. Harbors and ports are attractive bomb-planting targets. This means a bomb, or bombs, might be placed in confined areas that can be tough for humans and robots to work in.

The tech is designed to tackle the tough conditions in these places, which might be shallow or have tidal currents. It has six thrusters powerful enough to resist 2.5 knot currents and still hover in place to evaluate and then take care of the bomb.

Sea Wasp can also attach itself to structures, like a ship’s hull, and operate as deep as about 200 feet underwater.

Lightweight, at less than 200 pounds, and small, at about five and a half feet long, the Sea Wasp is easily transportable and can be rapidly deployed from harbor walls, the beach and a range of boats.

IEDs are not one-size-fits-all. By definition, they are improvised and therefore can wildly vary. To handle this, the Sea Wasp comes prepared with all sorts of tools it would need to handle the range of IED form and design.

It only takes two humans from an EOD team to operate Sea Wasp and pilot it from the surface.

The pilots use a control console that can either be onboard the support vessel or in a vehicle on shore. The control is connected by fiber optic tether to the Sea Wasp, which is also how the robot gets its power.

To do its job, Sea Wasp is equipped with state-of-the-art sensors, including wideband sonar, LED lights and video cameras. All of these help provide Sea Wasp, and its operators, the data necessary to defuse bombs. The sensor suite also enables them to work effectively in areas underwater where there is limited visibility.

To navigate while underwater, Sea Wasp uses high-precision tech, like its onboard Doppler Velocity Log and Internal Measurement.

Using the sensor and navigation suite, Sea Wasp and its pilots find the threat that could be hidden anywhere.

Next, the Sea Wasp leverages its tools and the pilots’ techniques to evaluate the threat and decide on the best way to dispose of it.

The pilot then uses the Sea Wasp’s thrusters to lock into position on a ship’s hull or wherever it needs to be to get the work done.

While this Sea Wasp does not have tentacles like its real-world namesake, it does have a very handy five-function manipulator arm.  The arm has a camera attached to it that helps with examining and processing the IED. The arm also carries tools, just like a human would, to neutralize and remove the bomb.

The operator can use the manipulator arm to place a disruptor next to the explosive device.

When its job is done, the Sea Wasp is brought back to the surface where it is recovered by the team. The disruptor is then fired from the surface. It detonates, and the threat is destroyed.