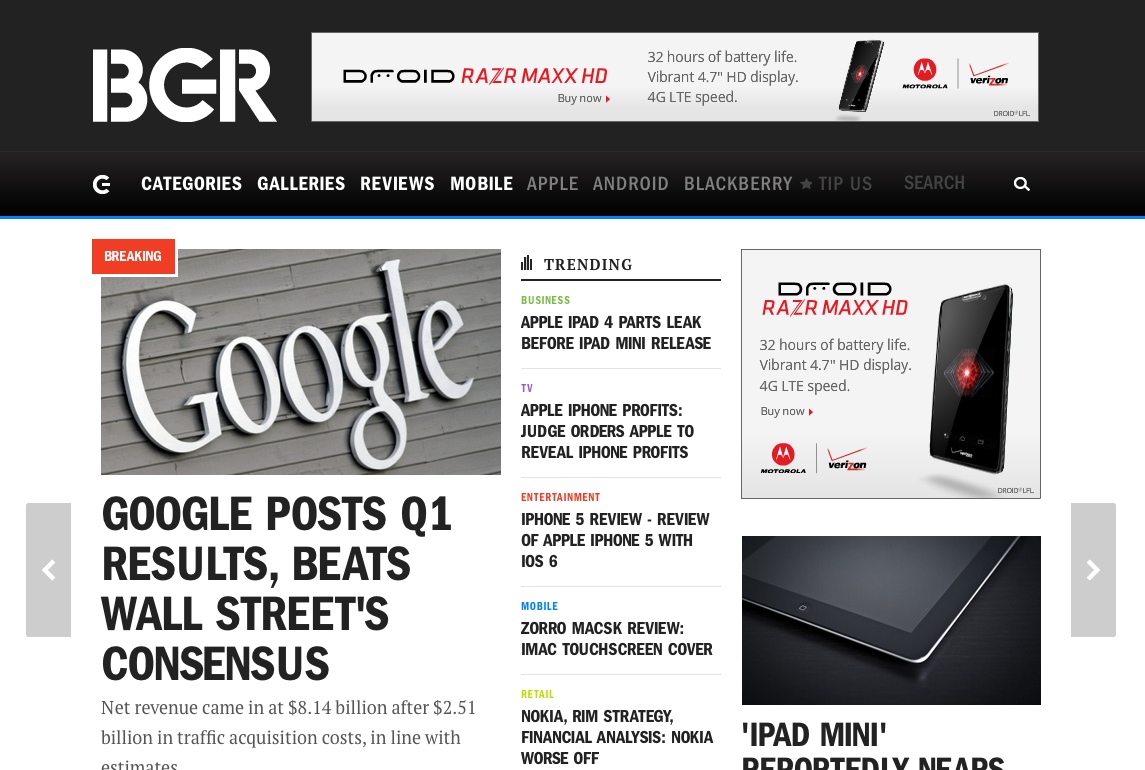 BGR first launched just about six years ago. In that time, there have been two redesigns and today marks the third. This one is a major one, and we’re finally also rebranding with new logos, colors and a new personality. First off, you’ll notice that the site’s new home page does two things: it gets you the latest and most important information while also doing a better job of highlighting important and original content.

Below the featured section, there aren’t posts packed together like sardines in a can, there’s a big beautiful layout with large images, headlines and the story. As far as the new logo and branding, the original logo was something I just made myself, and it has worked for a while. We wanted something that reflected what the site has grown into, though, and a logo and brand that could stand on its own in the coming years. Something that was clean-cut, strong and powerful, but still with an edge and personality. We think we have achieved that.

We also wanted to design a site that reflected the current state of the web, and how everyone accesses BGR. A desktop, a tablet and a mobile phone should all provide the same website experience regardless of how you read BGR and we do that now with a website that uses responsive design. No mobile themes and no redirects to a subdomain, just the same site.

There are also a lot of new ways we can feature breaking stories, important stories and fun stories all over in various verticals. Our daily hit list is a can’t miss recap of the day, and our game changers section points out the latest major stories in the tech and mobile space. There’s a large focus on specific verticals and categories, too with our new hubs layout. This way, if you live and breathe Android news, you can hang out on the Android hub at www.bgr.com/android, for instance, and get the latest Android stories all in one place. This works for all categories on the site.

Something else we’re extremely proud of is the fact that we have finally eliminated annoying sidebars. All BGR pages are full width, allowing all of the content to flow from left to right instead of being trapped in a vertical panel. We read from left to right, and now you can just read what you want to more easily.

What about real-time information? Another big focus, and one that will continue to be enhanced over time, is the fact that all aspects of the site will be live. Our trending section surfaces the most visited stories in real-time, comments will update every time there’s a new one, new posts will drop in if there’s a new one published while you’re browsing on the homepage, and other unique elements will all start to become real-time over the next few weeks.

This isn’t nearly all of what we have done with the new site, so please look around and let us know what you think of the new BGR. Check out the galleries, hubs, review pages, tip us box, search area, integrated Twitter feeds, mini hubs, featured section pages and more. Our rockstar developer Corey Gilmore led the redesign for us, so please take a moment to send him some love (or yell at him like we have been doing for the last couple months).

We’re also very happy to have partnered with Motorola on the relaunch and rebranding of BGR. Motorola has been a great partner and really understood our vision for the new site and brand, and has provided great support during the process. There is also a BGR app for Android launching in the next couple weeks, so thanks to Motorola for its help on that front as well.