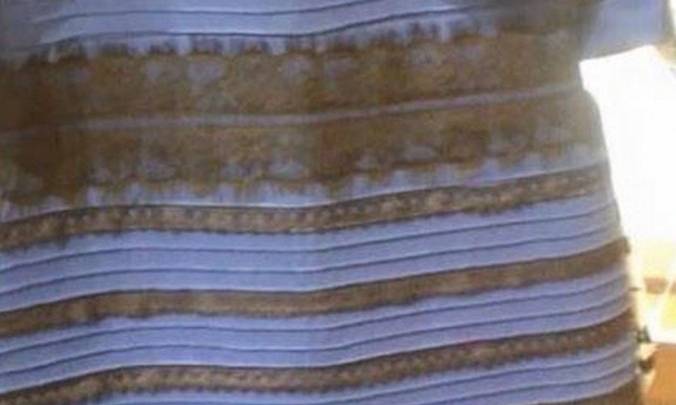 I promise this is the last thing I’ll ever write about The Dress. Really, I swear. But I just looked at the exact same picture I’d used earlier this morning that I thought clearly showed a light-blue-and-gold dress… and now it looks blue and black.

FROM EARLIER: I thought the ‘What color is this dress?’ controversy was stupid… until I asked my wife to weigh in

And it’s not even close, either — when I looked at the picture again, I had to ask my colleagues if they’d secretly switched it out with a different picture just to mess with me. Being a classic paranoid, I didn’t believe them when they told me they didn’t, so I went to look at other links to pictures of the dress… and I can’t see how I ever thought it was gold.

This entire thing reminds me of an outlandish scenario from a Philip K. Dick novel in which things that I believed to be true in the past are systematically being erased and replaced with false memories by unknown, sinister forces. I now fear going outside my house because I’m worried the sadistic color-changing dybbuk creature will make all the snow look suddenly blue or that it will try to kill me by switching the order of the red and green lights at intersections.

I’m going to spend the rest of the afternoon huddled in a corner and longing for the happier days when the Internet only gave me exciting footage of llama chases and not reality-altering hell-sent dress photos.