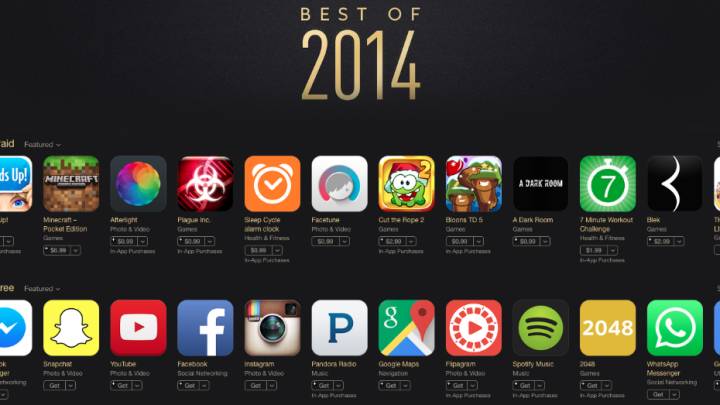 Apple has finally posted its lists of the best performing apps of the year, revealing all of the must-have iPhone and iPad apps, whether free or paid, for 2014.

FROM EARLIER: Here are 30 awesome iOS apps Apple thinks you need to have

The company highlighted the top free iPhone and iPad apps in its Best of 2014 section, as well as the top iPad and iPhone paid apps of the year, though iOS users will not be surprised to see certain apps make the list.

The No. 1 free iPhone app of 2014 was Facebook Messenger, the special Facebook feature the company stripped from the default Facebook mobile app and turned into a standalone app — the official Facebook app is found on fourth position, with Instagram taking fifth place.

The No. 1 paid iPhone app of the year was Heads Up!, with Minecraft – Pocket Edition being the runner up.

On iPad, the top free app was YouTube, followed by Netflix, while the best paid iOS app for tablets was Minecraft.

When it comes to top grossing apps, Clash of Clans and Candy Crush Saga took the top two spots.

iPhone and iPad buyers looking to see the complete app lists Apple has included in its Best of 2014 App Store featured section and grab some of the best apps of the past year, can follow the link below to do so.