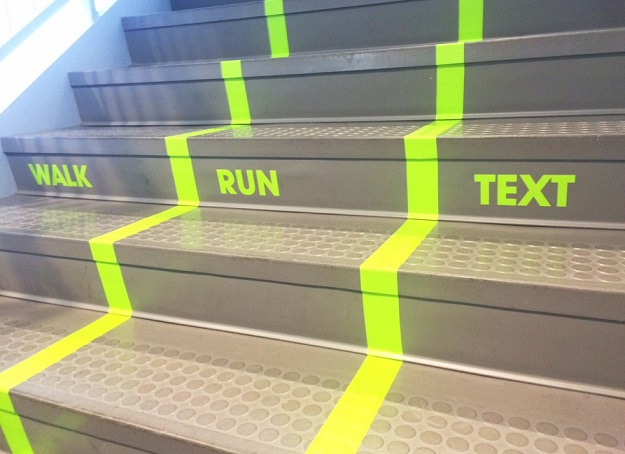 In a sign of the times, Utah Valley University has marked a stairwell in its student center with areas specifically designated for texters. Though the stair design is intended to be equal parts art and equal parts function, there’s no denying that we, as a society, may very well be headed down a path where ‘texting lanes’ are necessary.

To wit, The Atlantic two years ago published a piece detailing how distracted walking causes more injuries than distracted driving. From walking into poles to people inadvertently walking down busy roads, the number of folks seemingly glued to their phones while walking remains an ongoing nuisance, at best.

Interestingly enough, the origin of the viral photograph above was more of an exercise in creativity than an effort to keep students from running into one another.

In a press release on the matter, UVU creative director Matt Bambrough said:

When you have 18- to 24-year-olds walking on campus glued to their smartphones, you’re almost bound to run into someone somewhere; it’s the nature of the world we live in. But that isn’t the reason we did it — we used that fact to engage our students, to catch their attention and to let them know we are aware of who they are and where they’re coming from. The design was meant for people to laugh at rather than a real attempt to direct traffic flow.

Still, it’s not a bad idea in the slightest, and is actually not the first time we’ve seen something like this. Just this week, for instance, the BBC reported that Antwerp, Belgium now has some streets marked off as “test walking lanes”, though that initiative was a not so subtle marketing effort from a smartphone store.