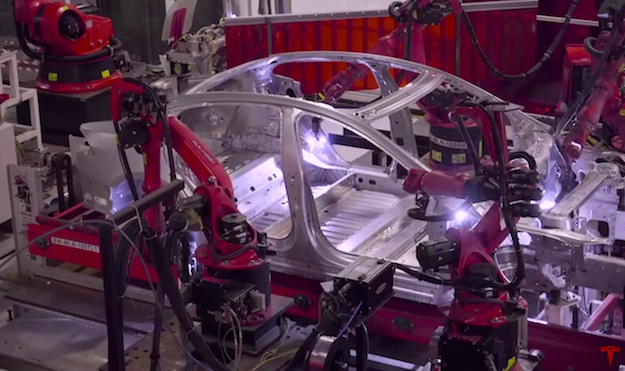 Tesla typically likes to keep the work done in its Fremont, California factory shielded from public view, but the company in recent weeks has been unusually forthcoming about letting the outside world take a glimpse at the advanced robots that help assemble the world’s most popular fleet of electric vehicles.

Interestingly, Tesla likes to boast that its robots are not only the biggest and most advanced in the world, but that they are also capable of doing five different tasks at once. What’s more, Elon Musk once boasted on Instagram a few months back that Tesla’s production line now features 542 robots in total.

Most recently, Tesla put out a time-lapse video dubbed “Symphony of robots building Model X.” And as the name implies, the video provides us with a rather brief look at Tesla’s robots helping put together a Model X.

If you wan’t just a little bit more, not to worry. A TV video crew a few weeks ago, for the first time in 5 years, was granted access to Tesla’s factory where they captured never before seen footage of Tesla’s gargantuan factory floor.

That video can be seen below in footage originally recorded for CBS5 KPIX in San Francisco.