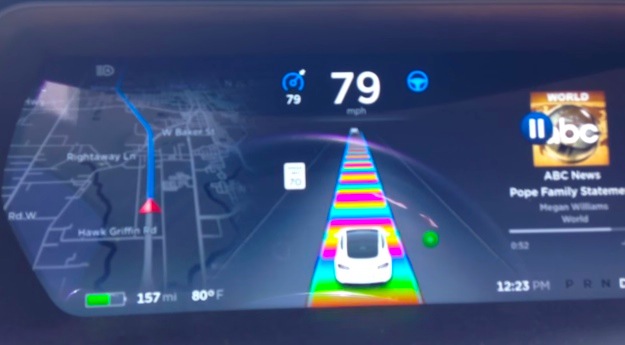 Tesla on Monday issued a voluntary recall for every Model X out on the road. Far less important but much more exciting was the release of a new easter egg for Tesla vehicles that unofficially pays homage to Mario Kart and Saturday Night Live. And in keeping with the video game motif, the activation of the easter egg requires a cheat code, so to speak.

Thankfully, the cheat code isn’t much of a secret as its very existence was tweeted out by Tesla CEO Elon Musk earlier in the day.

Upon activating autopilot four times in a row, the road on the digital dash transforms from a dull grey to a psychedelic rainbow. Video of the whimsical Easter egg can be seen below. Notably, the Easter egg effect, however brief, is accompanied by a clip from the song “Don’t fear the reaper” which was often used in the Will Ferrell SNL skits premised on the “more cowbell” joke.

As a quick aside, how cool is it that we now live in a world where auto manufacturers are putting out software easter eggs? Of course, this isn’t the first time Tesla has decided to have a little bit of fun with it software.

Last February, Tesla included an easter egg on the Model S which changed the Model S photo in the control panel setting view to a Lotus Esprit submarine, the same one that famously appeared in the James Bond film “The Spy Who Loved Me.”