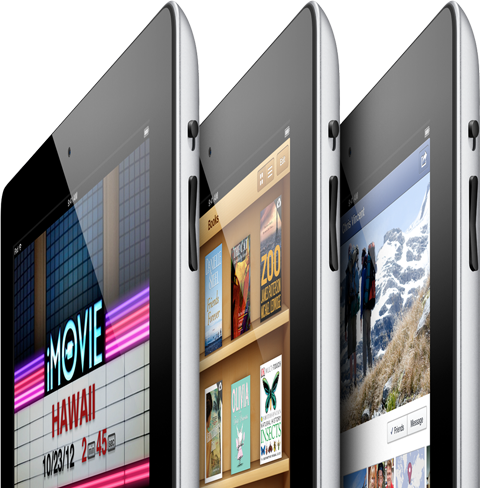 Is the tablet market shaping up to follow the smartphone market? Research firm IDC on Thursday reported that Apple’s (AAPL) share of global tablet shipments sank to 43.6% in the fourth quarter last year from 51.7% in the same quarter a year earlier, while Samsung’s (005930) share grew to 15.1% from 7.3% in the year-ago quarter. Both companies showed year-over-year growth, with Apple’s iPad shipments jumping 48.1% to 22.9 million units from 15.1 million, and Samsung’s channel sales spiking 263% to 7.9 million tablets from 2.2 million.

Other movement last quarter: Amazon’s (AMZN) estimated tablet share dropped from 15.9% to 11.5%, Asus shot up from 2% to 5.8% and Barnes and Noble’s (BKS) share plummeted from 4.6% to just 1.9% with Nook tablet shipments estimated to have totaled 1 million units.

Tablet Shipments Soar to Record Levels During Strong Holiday Quarter, According to IDC

“We expected a very strong fourth quarter, and the market didn’t disappoint,” said Tom Mainelli, research director, Tablets, at IDC. “New product launches from the category’s top vendors, as well as new entrant Microsoft, led to a surge in consumer interest and very robust shipments totals during the holiday season. The record-breaking quarter stands in stark contrast to the PC market, which saw shipments decline during the quarter for the first time in more than five years.”

Apple’s iPad once again led the market, and the firm’s shipment total of 22.9 million units was exactly in line with IDC’s forecast for the period. A strong iPad mini launch, plus availability of the fourth generation full-sized iPad, led to solid 48.1% shipment growth over the same quarter last year. However, strong competition in the market led to Apple’s market share declining for a second quarter in a row (down to 43.6% from 46.4% last quarter). Number two vendor Samsung experienced 263% year-on-year growth, shipping nearly 8 million combined Android and Windows 8 tablets during the quarter to grab 15.1% of the market, its same market share total from the previous quarter.

Amongst the other top 5 vendors, Amazon and Barnes & Noble both saw their market share increase sharply as new products gained traction during the holiday season. Amazon shipped more than 6 million tablets during the quarter, increasing its share to 11.5%, up from 8.3% the previous quarter, with year-over year growth of 26.8%; Barnes & Noble shipped close to a million units, increasing its share to 1.9%, up from 0.7%, despite a year-over-year growth rate of -27.7%. Meanwhile, number four Asus saw its share slip from 7.8% to 5.8% despite continued strong shipments of its Google-branded Nexus 7 tablet and the highest year-over-year increase in the top five at 402.5%. Microsoft entered the market during the quarter with its Surface with Windows RT tablet, but failed to reach the top five after shipping just shy of 900,000 units into the channel.

“There is no question that Microsoft is in this tablet race to compete for the long haul. However, devices based upon its new Windows 8 and Windows RT operating systems failed to gain much ground during their launch quarter, and reaction to the company’s Surface with Windows RT tablet was muted at best,” said Ryan Reith, program manager, Mobile Device Trackers at IDC. “We believe that Microsoft and its partners need to quickly adjust to the market realities of smaller screens and lower prices. In the long run, consumers may grow to believe that high-end computing tablets with desktop operating systems are worth a higher premium than other tablets, but until then ASPs on Windows 8 and Windows RT devices need to come down to drive higher volumes.”