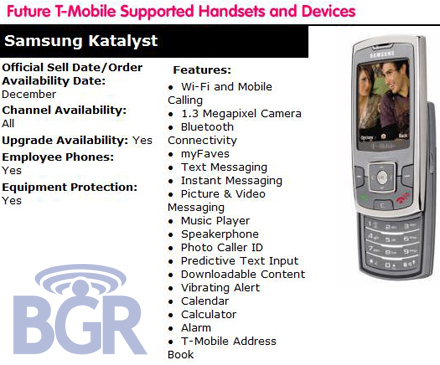 There have been mumblings about it before, but it looks as if we now have a more solid release time frame. Currently slated to hit shelves in December, the Samsung Katalyst will be a new addition to T-Mobile’s Hotspot@Home service, and the first slider-phone in the Hotspot@Home line-up. The Katalyst is sort of basic, with mediocre features such as a now-standard 1.3 megapixel camera, Bluetooth, SMS, MMS, myFaves support, etc. It might be safe to say the pricing won’t be hurting your wallets, which is always a good thing. So if your T-Mobile coverage is lacking at your home or office, you can rest easy knowing come December, the T-Mobile Samsung Katalyst will be able to run on your existing Wi-Fi setup, and deliver all those missed calls and text messages.