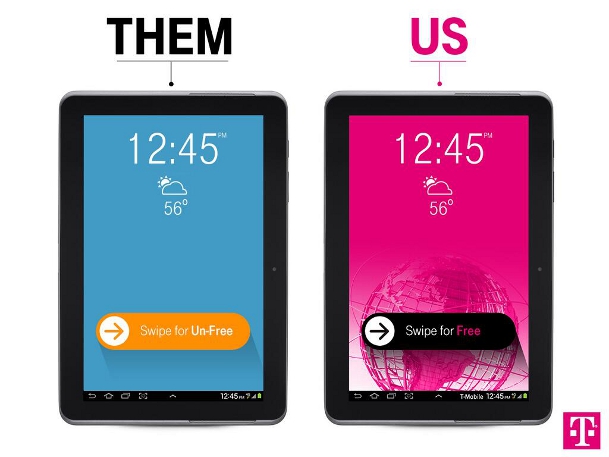 As part of the latest initiative in its ‘uncarrier’ program, T-Mobile has set its sights on the tablet market. In an effort to give consumers more reason to buy data-enabled tablets, T-Mobile will give customers 200MB of data every month for the entire lifespan of any tablet for free starting on November 1st. That means no service contracts are required to reap the benefits of this new plan —  devices will be completely separated from rate plans.

T-Mobile has taken the time to outline exactly what you can do with 200MB of data, in case you’re curious: 2500 emails, 800 Instagrams, 200 Vines, or 200 minutes of music streaming. Although we cannot verify every one of these claims, the point remains that T-Mobile will be the only major carrier with free data for tablets starting next month.

Along with the data plan news, T-Mobile also announced that it will be offering some of its tablets for $0 down as part of its new monthly payment plans. The monthly payments are entirely dependent on the device, but as an example, on a payment plan the iPad Air will be free up front with subsequent $26.25 monthly charges for two years.

These announcements come right on the heels of AT&T’s similar $5-per-day data plan for its own tablets, which gives users 250MB of data for 24 hours. AT&T also has a $25 month-long data plan, but T-Mobile is attempting to undercut the competition even further with a monthly plan than costs “as little as $10.” In true Legere fashion, T-Mobile had some choice words for all of the other providers today in a Twitter tirade explaining the announcements:

“Need more data? We’ve made it affordable!” the company crowed. “Like as little as $10/month affordable. Have you seen what those other guys charge?! It’s bull****.”