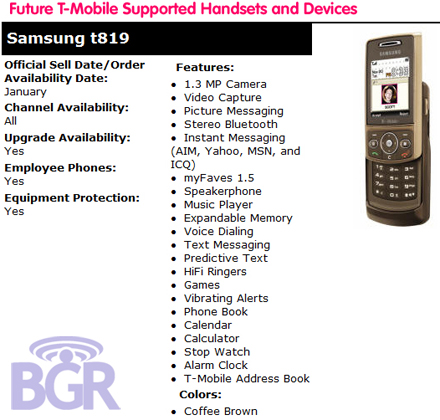 So many 3G phones, yet no network to run ’em on yet! Regardless, we’ve got the drop on T-Mobile’s Samsung t819! A 3G slider, with rather ordinary specs like a 1.3 megapixel camera, A2DP, myFaves, microSD slot, and voice dialing. The release looks like January, and the handset is slated to come in only one color — coffee brown. We don’t have specific pricing details at the moment, but if we had to guess, it’s going to be a lot cheaper than that Verizon Palm Treo 755p, you know?