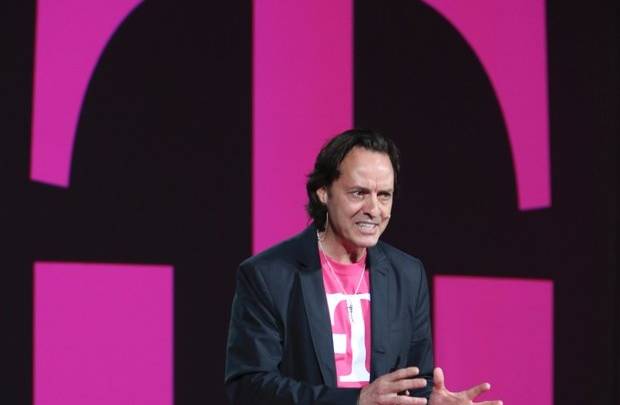 T-Mobile certainly knows a good opportunity when it sees it. The “Uncarrier” on Monday unleashed a public relations barrage against its rivals that urged wireless customers to sign a Change.org petition telling Verizon and AT&T to dump overage fees on mobile data plans.

“Traditional wireless plans start with a low monthly fee for a fixed amount of domestic minutes, texts or data,” T-Mobile writes in its petition. “Once consumers go over those limits — even by a little — they’re hit with dramatically higher rates and extreme penalties.  These plans seem purpose-built to drive customers over that invisible line into massive overage charges. “

T-Mobile first started targeting rivals’ use of overage fees last week when it unveiled its new Simple Starter plan that offers unlimited voice and text along with 500MB of data for $40 per month. However, while the Simple Starter plan doesn’t have any overage fees, it does completely cut off your data service after you exceed your 500MB limit, which could force you to buy one-day or one-week “passes” that will give you additional data until the end of the month.

In the past, T-Mobile has simply knocked down LTE users’ connections down to 2G speeds after they’ve exceeded their monthly limits and it’s unclear if the carrier’s new plan is a one-off deal or a sign of things to come.

Legere Starts Petition for Consumers to Call on AT&T, Verizon and Sprint to End Overages

BELLEVUE, Wash. – April 14, 2014 – T-Mobile US, Inc. (NYSE: TMUS) today shifted the national conversation on wireless to a new level, unveiling its latest Un-carrier move – a campaign to eliminate overage penalties, one of the most reviled wireless industry practices. While abolishing overages for all customers on T-Mobile consumer plans, its CEO has also laid down a challenge to the nation’s largest carriers, AT&T, Verizon and Sprint, to do the same.

More than 20 million Americans were hit with punitive overage charges in 2013. And these penalties from the three largest U.S. carriers take more than an incredible $1 billion out of consumers’ pockets every year.

“Today I’m laying down a challenge to AT&T, Verizon and Sprint to join T-Mobile in ending these outrageous overage penalties for all consumers – because it’s the right thing to do,” said John Legere, president and CEO of T-Mobile. “Overage fees are flat out wrong. Agree with me? Join me in putting this challenge to all the major national carriers by signing my petition on Change.org. Right here. Take one minute to be a part of this consumer movement.”

“Charging overage fees is a greedy, predatory practice that needs to go,” continued Legere. “Starting in May for bills arriving in June – regardless of whether you’re on Simple Choice, Simple Starter or an older plan, we’re abolishing overages for good. Period.”

Traditional carriers’ entry-level plans lure customers in with a low monthly fee for a fixed amount of domestic minutes, texts or data. Once consumers go over those limits – even by a little – they’re hit with much higher rates, often dramatically higher.  These plans are purpose-built to drive customers over that invisible line into massive overage charges. The result has been a culture of fear, worry and surprise every time the wireless bill arrives. For example, an individual on AT&Ts entry-level plan, advertised at $45 per month, will pay $125 if he uses just the average amount of data for a U.S. smartphone user (1.5 GB per person).

“The worst thing about these overage fees is that they’re often inflicted on those who can least afford them,” added Legere. “As an advocate for consumers, we’re putting a stop to that. I personally won’t be satisfied until we obliterate this shameful practice from the entire wireless industry.”

To give a voice to U.S. wireless consumers, Legere has started an online petition at Change.org/AbolishOveragescalling on AT&T, Verizon and Sprint to end overages. You are invited to sign the petition and add your voice to the growing movement to rid the wireless industry of domestic overages once and for all.For more information, visit the T-Mobile Newsroom, download T-Mobile b-roll or read John Legere’s blog about today’s announcement.Overage estimates from third party bill screening report surveying over 20,000 wireless customers multiplied by major U.S. carriers’ reported postpaid subscribers. No overages for U.S. domestic calls, texts, and data usage only. Visit a T-Mobile store for details. As always, we encourage customers to review their plans and features, and talk with our retail associates to make sure their current wireless service gives them everything they need.