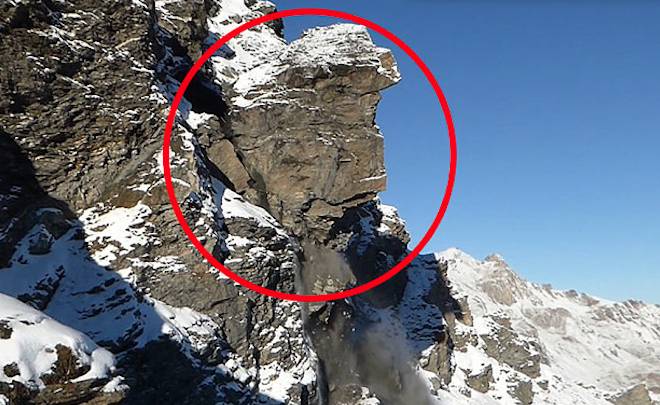 Nowadays everyone’s got a camera handy, which means you can easily take photos and record videos of things happening around you. Just the other day we saw a scary video of an aircraft making a landing right after passing very near to a huge lightning strike as filmed by a storm chaser. Now it’s time to look at a video recorded by a geologist in Switzerland who captured the exact moment when 2,000 cubic meters (70,000 cubic feet) of solid rock broke loose from a mountain, plummeting some 1,000 feet into a valley.

However, this particular mountain move was expected.

The event took place in the Swiss Alps and the massive fall generated an avalanche on Mel de la Niva, The Telegraph reports, a 9,040-foot mountain near Evolene. The noise from the rock fall echoed around the valley as the mountain fell.

A small hamlet below the mountain had been evacuated and a road nearby had been shut the day before the drop, as geologists expected this particular rockslide after studying the strong geological activity in the region.

The video showing this incredible natural phenomenon follows below.