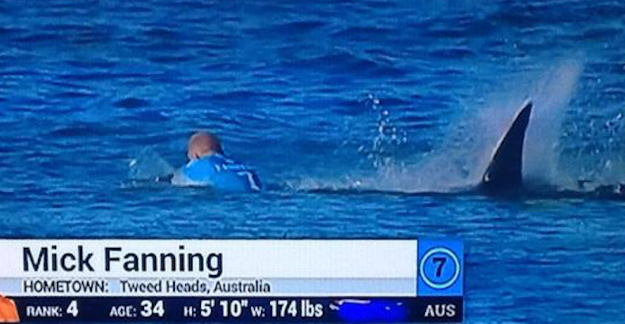 Sharks are amazing, scary beasts capable of furiously ripping through flesh and humans caught in the water with them are usually easy victims. Based on the image above showing a shark fin appearing ominously behind a surfer, you might think that the surfer is about to become a quick meal. However, if you watch the entire video that the image is taken from, you’ll find yourself happily mistaken.

34-year-old professional surfer Mick Fanning managed to fight and escape a terrifying shark attack during the finals of the J-Bay Open recently and the TV crews filming the event caught everything on video.

Fanning told a reporter that he “punched it in the back,” Business Insider says — “it” being the giant shark that appeared out of nowhere behind him. Fanning was quick to react and the safety crews hurried to hurl him out of the water. A second surfer is also seen getting out of the water during the attack.

Check the video yourself to see how Fanning dealt with the huge surprise, and pray you’ll never have to do the same thing.